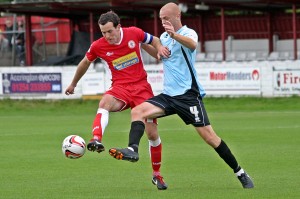 Accrington lost at home for the first time this season,0-1 in controversial circumstances against Cheltenham Town.

Jason Taylor’s thumping shot hit the back of Ian Dunbavin’s net after taking a big deflection on 71 minutes.

But the goal was the result of a soft free kick awarded by referee Scott Mathieson, the debatable decision was upheld for a Peter Murphy foul on Craig Braham-Barrett attacking on Cheltenham’s left.

A dull first half saw little action at either end, Keith Lowe was lucky to receive a yellow card on 16 minutes for a challenge on the enigmatic Laurence Wilson. It was a tackle that had similarities to the previous Saturday and Danny Webber’s dismissal.

Kal Naismith had the Reds best opportunity on 36 minutes, a shot from 25 yards out that just fizzed wide of the right hand post.

A first start for Shay McCartan saw an appeal for a penalty on 41 minutes, but he was completely ignored by the referee, leaving the score 0-0 at the interval.

Portsmouth hero Murphy appealed in vain for a penalty on 53 minutes after going down in the area, but again the decision was not favouring Accrington.

Wilson, who had a hand in everything positive for Accrington, went close with a combined cross shot that eluded everyone on 57 minutes.

But the major talking point came 19 minutes from time when Murphy was penalised, the free kick taken and when the Reds failed to clear Taylor slammed in a shot that was diverted off a defender and in.

Stanley pressed for a leveller but were forced to play the final five minutes with ten men after Wilson suffered a suspected groin injury, James Beattie only able to name six substitutes due to the sparse squad and had already made his three changes.

The game could have an even more bitter ending for the Reds, a great run from the lively Sam Deering down the left with Taylor in support should have put the Robins two goals to the good, but he poked it narrowly wide of the far post.

It was a match in which neither side deserved to walk away with all three points but the Accy faithful will believe they deserved a point. 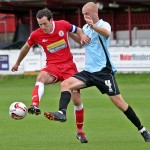 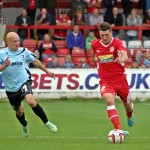 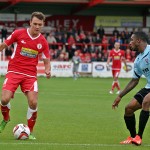 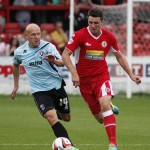 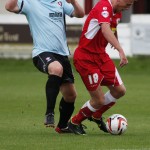