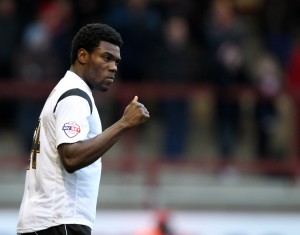 Stanley lost their opening game of 2014 at promotion-chasing Fleetwood despite Kayode Odejayi grabbing a goal on his return.

Odejayi, who had re-signed for the Reds that morning on loan from Rotherham until the end of the season, got a goal back on 80 minutes but the damage had already been done.

Fleetwood striker Jon Parkin got the home side off to a blistering start with a sixth minute goal before David Ball added a 58th minute strike and substitute Danny Carr added a third in injury time to seal the win.

It was wet and windy conditions at Highbury with the first chance falling to Stanley’s Michael Richardson whose long range strike was deflected just wide of the Fleetwood goal.

Young keeper Andrew Dawber was then in the action, superbly denying Antoni Sarcevic and Jon Parkin.

The Stanley stopper though could do nothing against Parkin’s next chance on six minutes when he got he ball in the area from Nathan Pond and smashed it into the roof of Dawber’s net.

Fleetwood were bossing the early exchanges and unmarked David Ball almost doubled Fleetwood’s advantage on 16 minutes but couldn’t connect properly with the ball and it fell kindly for Dawber.

Stanley started getting back into the match towards the half hour mark with a couple of dangerous balls into the box from Nicky Hunt and Kal Naismith but the Reds couldn’t capitalise.

And the visitors then suffered a blow on 33 minutes when defender Hunt hobbled off injured meaning manager James Beattie had to rearrange his side. Josh Windass came into midfield with Richardson dropping to right back.

The last chance of the half fell to Fleetwood left winger Ball who curled a strike just wide on 39 minutes and, with the score only 1-0 at the interval, Stanley were still in it.

However Fleetwood continued to create the more clear-cut chances and Ball should have given his side a greater lead on 55 minutes when he burst clean through with only Dawber to beat. However Ball took too long and Richardson made a brave sliding tackle to deny the winger.

Ball only had a minute to dwell on that though as, in the next attack on 58 minutes, they make it 2-0 when a Sarcevic ball from the right was tucked home by the wideman at the far post.

Beattie brought on Will Hatfield and Shay McCartan on 65 minutes and they began to make an impression.

In fact it was Hatfield who won the free kick from which Odejayi leapt highest to find the back of the net on 80 minutes.

With six minutes of added time, Stanley were spurred on by a vocal following but it was Fleetwood who made a chance count, Danny Carr clean through and, despite Dawber almost putting him off, he completed the scoring. 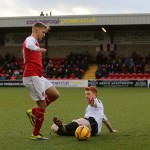 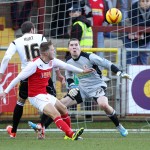 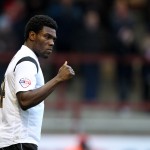 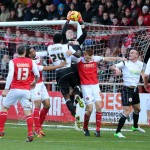 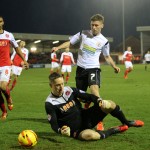 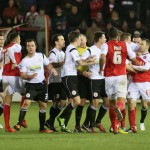 Things get a little heated at Highbury… KIPAX 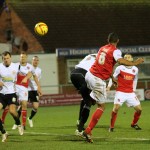