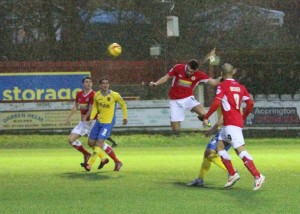 Accrington Stanley’s early start proved costly as they were  beaten by three goals to two at the Store First stadium.

After conceding three goals in the opening 24 minutes, Peter Murphy and Kal Naismith restored hope but couldn’t grind out the decisive goal.

Stanley made two changes going into the game with James Gray and Lee Naylor back in the squad, Michael Liddle dropped to the bench and Kayode Odejayi returned to his parent club Rotherham United after his loan expired.  Dean Winnard also had a starting spot as he made his 200th appearance for the club.

With only six minutes on the clock the visitors took the lead as Tom Nichols raced through and lobbed the ball over the indecisive Marcus Bettinelli.

The attacker doubled his tally six minutes later when he latched onto a ball down the right channel and burst into the box before sliding the ball past Bettinelli.

Naylor lost the ball in the left-back position and Exeter broke three on two but Tom Aldred produced an excellent sliding tackle as Liam Sercombe was about to pull the trigger.

Danny Webber created a chance from nothing when he picked up on some slack defending  and forced Artur Krysiak into a low save.

The Grecians had their third on the 24th minute when a throw-in from the right presented itself to Alan Gow on the edge of the area and he squeased a shot in at the near post.

Stanley got themselves back into the game eight minutes before half-time when Niasmith’s cross from the right was headed home by Murphy 12-yards out.

Naylor fired a free-kick goalwards on the stroke of half-time but a defender was in the right place to head it clear off the line and deny the winger a goal on his first game back from injury.

Stanley came firing out of the blocks in the second-half as Piero Mingoia drove down the left flank and cut in onto his favoured right-foot but he couldn’t keep his shot down.

The Reds had their just desserts on the 48th minute when Naismith planted a free header into the top corner meeting Naylor’s pin-point cross.

Nichols continued to cause the Stanley defence problems all game and when he burst into the penalty area and hit the deck on the 54th minute, and the referee had no hesitation in pointing to the spot.

Up stepped Alan Gow to extend the visitors lead but Bettinelli dived down to his left to save his second penalty-kick in two games.

A moment of magic from Krysiak denied the hosts an equaliser saving first from Gray, and the rebound fell to Mingoia who had the whole goal gaping to tap in from four-yards but the Exeter goalkeeper threw himself back across goal to preserve his sides lead.

Substitute Shay McCartan latched onto a ball over the top minutes after coming on but his snap shot across goal trickled out for a goalkick.

Stanley threw all hands to the pumps late on but failed to find a way past the inspired Krysiak.

The defeat is the first Stanley have suffered at home in six games. 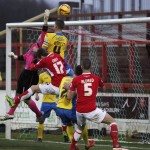 Artur Krysiak is forced into action in the Exeter goal 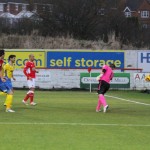 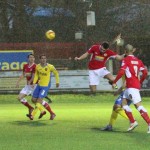 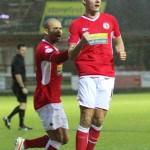 The Scot celebrates his goal 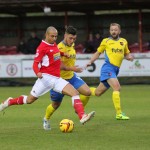 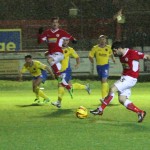 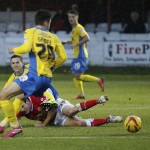 Luke Joyce slides into a tackle 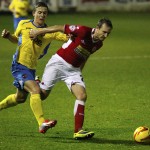