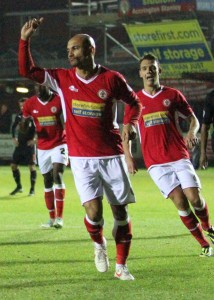 Accrington Stanley took the bragging rights in the Lancashire derby with a 2-0 win over local rivals Fleetwood Town.

A penalty from Danny Webber and Kayode Odejayi’s second goal for the club in three games extended Stanley’s unbeaten run in the league to eight games and moved them up to 19th in the table.

There was one enforced change from Saturday afternoon’s win over Torquay United with Nicky Hunt ruled out through suspension. Michael Richardson took his place at right-back, an unorthodox role for the central midfielder.

The visitors started well with Gareth Evans scampering down the right before cutting inside to try and get a shot away but it was blocked by Michael Liddle.

Jeff Hughes then drilled an effort wide from the edge of the area as the visitors began to exert their dominance.

Shortly after, they came close to taking the lead with the first clear-cut opportunity of the evening as Evans raced down the wing to pull the ball back for the in-form Antoni Sarcevic but the midfielder slammed his shot against the bar to fire Stanley a big warning.

Piero Mingoia had Stanley’s first shot on target, but it was tame and easy for the visiting goalkeeper Scott Davies to gather.

Fleetwood loanee Nathan Tyson, a player with pedigree at a higher level, was looking dangerous and rolled a shot just past Bettinelli’s post after using his pace to breach the Stanley back-line.

Luke Joyce twice tried his luck from distance but both of his efforts flew over the bar with visiting goalkeeper Davies untroubled.

Graham Alexander’s men were trying to use their heads to win the game with Tyson flashing a header past the post from a Hughes cross, centre back Ryan Cresswell put Charlie Taylor’s free-kick over and Sarcevic seeing a header of his own deflected narrowly over the bar.

In the last action of a goalless first half, Cresswell headed wide at the back-post after getting the run on Stanley striker Kayode Odejayi at a corner.

The second half began with little happening in either penalty area and James Beattie was the first manager to blink, replacing Bowerman with Danny Webber on the hour mark.

Fleetwood carved out the first chance of the second period with Sarcevic cutting the ball back for Hughes, who saw his shot blocked behind for corner by Tom Aldred in the Stanley defence.

Webber slalomed past a couple of challengers and got his shot away but it was straight at Davies, who collected at the second attempt with Odejayi lurking.

At the other end, Cresswell ought to have opened the scoring but he put a free header wide of the post before Richardson volleyed narrowly wide for Stanley after Fleetwood failed to clear a corner.

Stanley were looking good value for a point but their night got a lot better as they were awarded a penalty with 15 minutes remaining.

Michael Liddle saw a shot cleared off the line and, in the penalty-area pinball that followed, Peter Murphy was felled by Charlie Taylor and Webber drilled the ball down the middle to put Stanley ahead.

Seven minutes later, it was 2-0. Odejayi collected a pass and used his strength to hold off the defender and swivel on the ball before firing past Davies to double the lead.

Fleetwood threw caution to the wind and made three attacking substitutions but it was to no avail as Stanley held on for all three points. 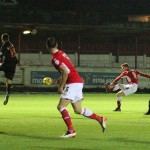 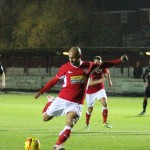 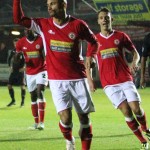 And the striker finds the net 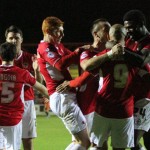 The Stanley celebrations after the first goal 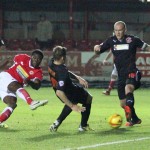 Kayode Odejayi spins and shoots to bag the second 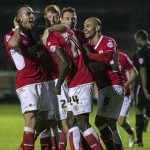 And his team mates mob him