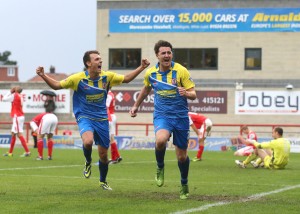 Accrington Stanley picked up a dramatic win over local rivals Morecambe with Peter Murphy scoring the winner in the 93rd minute.

The midfielder slammed home from 10 yards in front of the Stanley faithful to cap a great week for Stanley, who have picked up seven points from a possible nine and successive wins.

James Beattie named an unchanged team from Tuesday night’s victory against Bristol Rovers which meant that new signing George Bowerman had to be content with a place on the bench for the second consecutive game.

Stanley started well with Luke Joyce and Piero Mingoia both having long-distance shots blocked by the home defence before Danny Webber curled over from the edge of the area.

The Shrimps looked to open the scoring themselves with former Stanley loanee Jack Sampson curling an effort wide of the post after a quarter of an hour but the shot did not come close to troubling Marcus Bettinelli.

James Gray was involved in the thick of the action and went down after an altercation with Andy Parrish to the displeasure of the home fans, who thought the forward had gone down easily.

The Northern Ireland under-21 international made himself even more unpopular with the Shrimps faithful a minute later as he won the penalty which led to the opening goal.

He raced onto a through ball and was taken out by Morecambe goalkeeper Barry Roche with referee Mark Haywood showing no hesitation in pointing to the penalty spot.

Webber stepped up to send Roche the wrong way and give Stanley the lead with his first goal since the opening day of the season at Newport.

Jim Bentley’s side looked to hit back immediately and might have done if Stewart Drummond had kept his composure but the midfielder blazed his effort over the stand after Kevin Ellison’s header was blocked.

As with most derby games, this was a scrappy affair with little to choose between the sides. Morecambe were trying to put pressure on without looking dangerous.

Former Red Padraig Amond had the last chance of the half but he fired his shot over the bar as the half came to a close with Stanley in the lead.

The advantage didn’t last long into the second half as Morecambe equalised with their first attack.

A shot from distance by Fleming wasn’t held by Bettinelli and Ellison poked towards goal where Sampson had the easy job of smashing the ball into the empty net to level proceedings.

The home side almost completed the turnaround five minutes later as Bettinelli again spilled a shot from range but Tom Aldred was on hand to help his goalkeeper and clear the ball.

Stanley went close to re-taking the lead as Lee Naylor’s shot from distance stung the palms of Roche, who turned the ball away.

Amond almost got himself a goal against his former club as he got on the end of a long throw from Sampson but Bettinelli’s reactions were spot-on to turn the header over the bar.

From the corner, a cross came in and Sampson rose highest to get his head to it but it went just past the post with Bettinelli at full-stretch.

At the other end, a free-kick out on the touchline from Naylor almost went straight in but Roche was equal to the effort, stopping the full-back from scoring his first Stanley goal.

George Bowerman came on for his Stanley debut with just over 10 minutes remaining and was involved immediately, twisting and turning inside the area before seeing his shot caught by Roche.

Stanley smelled blood and continued their search for a winner with Kal Naismith testing Roche from 25 yards but the keeper got a glove on the ball to stop the winger scoring for the second game in a row.

Eventually, the persistence paid off and James Beattie’s side found the winning goal in the third minute of injury time.

Bowerman found Mingoia in space on the left and the winger drove towards the home defence, beating the full-back and putting the ball across the area. It was missed completely by the Morecambe defender and fell perfectly for Murphy to hammer home the winner in front of the 273 travelling Stanley supporters, sending them back down the M6 in a state of delirium. 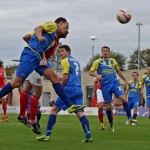 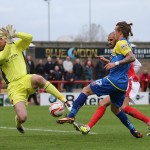 James Gray and Barry Roche tangle for the penalty 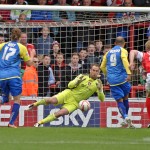 Danny Webber scores from the spot 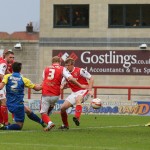 Peter Murphy smashes in the winner 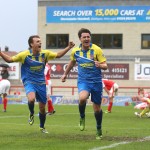 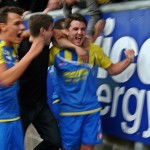 …and continue in the stand