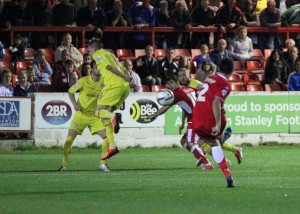 Two quick goals sent Stanley out of the Capital One Cup after they had kept Premier League Cardiff quiet for an hour.

The Reds had defended superbly but two goals in a minute from Nicky Maynard and Rudy Gestede meant James Beattie’s side exited the cup in the second round stage.

Manager Beattie had rejigged his threadbare squad with Lawrie Wilson and Ian Dunbavin missing out through injury and goalkeeper Marcus Bettinelli and right back Luke Clark coming in. Will Hatfield got the nod over Shay McCartan with Kal Naismith starting as the lone frontman.

Cardiff made eleven changes from the side which overcame Manchester City on Sunday as they had their chance to impress boss Malky Mackay.

Stanley’s debutant keeper Bettinelli, on loan from Fulham, was in action early on, catching a tricky corner to show the home fans he had no nerves despite only meeting his team-mates hours before.

Stanley’s first real chance came on 20 minutes when, after a penalty appeal in the area, the ball ran loose to Hatfield but he couldn’t stab the ball past Joe Lewis.

The action went straight down the other end and defender Michael Liddle came to Stanley’s rescue, heading Mark Hudson’s effort off the line.

The Reds forced a number of corners without being able to capitalise and then Cardiff lost Andreas Cornelius to injury. The £9m Danish signing was stretchered off on the stroke of half-time in his full debut for the Bluebirds.

The Reds made a lively start to the second half with Michael Richardson’s strike deflected for a corner while Stanley’s defence continued to limit any City attacks.

However the Premier League side almost made the breakthrough when Bettinelli was caught out of his goal trying to stop Maynard who had broke on the left. Maynard played the ball in from the by-line and Tommy Smith fired goalwards but Rob Atkinson superbly cleared off the line.

But two goals in a minute saw off the threat of Accrington. Firstly, on 61 minutes, Maynard got the ball in the area and showed his skill by flicking the ball over the Stanley defence and firing low into the bottom of the net.

Then, with Stanley still reeling, sub Gestede doubled the Bluebirds advantage, by catching the defence cold and slotting home from close range from a Jordon Mutch cross.

The Reds continued to press to try to get back in the game and there was a debut for youth team player Connor Mahoney who came on for Piero Mingoia on 72 minutes while Marcus Carver also entered the fray, followed later by Shay McCartan.

And the youngster caught the eye, bursting down the right and twice causing problems for the Cardiff defence.

Luke Clark belted a shot goalwards which wasn’t far off and Stanley can take a lot of positives from a battling show against Premier League opposition. 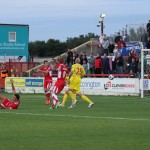 Stanley penalty appeals are turned down 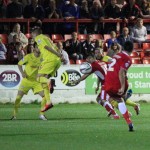 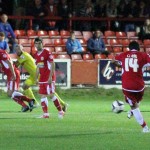 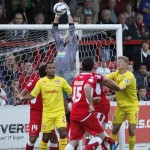 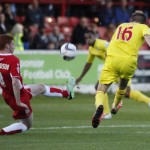 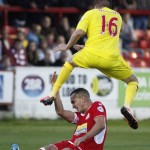 Tom Aldred slides into a tackle 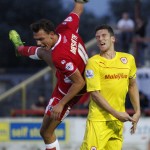