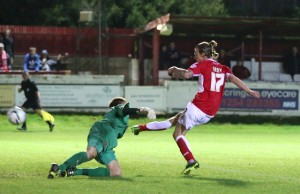 A quick-fire double salvo from Dagenham and Redbridge saw them leave the Store First Stadium with all three points.

James Beattie, who was forced to name himself on the substitute’s bench due to a lack of numbers within the squad, fielded an unchanged line-up from last weekend’s 0-0 draw at Plymouth with loan signing James Caton also on the bench.

Dagenham had the better of the early exchanges and the pace of Zavon Hines saw him slipped in behind the Stanley defence but his shot was straight at Marcus Bettinelli, allowing the goalkeeper to get a strong hand on the ball to palm it away.

Stanley responded and came close to scoring when Lee Naylor’s corner was headed goalwards by top scorer Peter Murphy but the post and a man on the Dagenham line denied him a third goal of the season.

Hines was the biggest threat for the visitors and only Nicky Hunt’s last-ditch challenge denied the wideman an easy tap-in, though there were suspicions of offside as the ball came across to the former West Ham man.

The Daggers almost contributed to their own downfall as goalkeeper Chris Lewington had the ball stolen from him by Kayode Odejayi but the frontman’s tackle took the ball away from both players and the defence eventually managed to clear their lines.

Former Arsenal trainee Rhys Murphy improvised cleverly to backheel the ball towards goal from a Hines free-kick and it looked to be looping over Bettinelli but the goalkeeper rose to make the catch and settle the nerves of the backline.

In the last action of the first half, Nicky Hunt was cautioned by the referee for a foul on Hines as the sides went into the break at a stalemate.

Stanley’s Shay McCartan had the first real chance of the second half, heading into the side-netting from an excellent position after some pinball in the Dagenham area.

James Beattie’s men were putting pressure on the visitors but a lightning-quick counter saw Wayne Burnett’s side punish Beattie’s men for their profligacy 10 minutes into the second half.

Odejayi misplaced a pass in the Dagenham penalty area and the visitors cleared their lines to leave Murphy and Hines in a two-on-two situation. Murphy threaded the ball into Hines, who slotted past Bettinelli to open the scoring.

Beattie immediately looked to the bench and introduced Blackpool loanee James Caton for his home debut.

However, the visitors doubled their lead just two minutes later as another counter-attack released Murphy and the man who joined the Daggers in the summer from Dutch side Telstar finished coolly beyond Bettinelli for his fifth goal of the season and his third in as many games.

The home side had to go for broke so Beattie introduced Kal Naismith and James Gray from the bench in a bid to rescue something from the game with just under twenty minutes remaining.

Stanley were almost gifted a route back into the game as Luke Wilkinson sliced his clearance but fortunately for the defender it landed on the roof of his own net.

Dagenham introduced new signing Chris Dickson for his debut with five minutes remaining and he set up Hines to shoot just over the bar from a narrow angle.

Dickson then headed wide when well-positioned to score before Stanley halved the deficit to give their visitors a late scare.

Lewington couldn’t hold onto Will Hatfield’s shot and substitute James Gray followed up to give the home side hope as the clock ticked into three minutes of injury time but it was too late as the Daggers took all three points back to Essex. 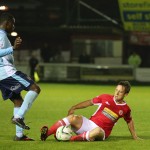 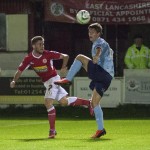 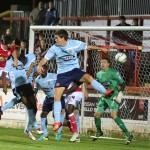 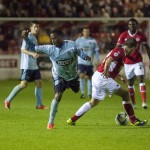 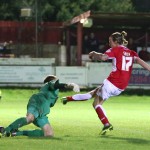