Stanley suffered another narrow defeat despite ending their wait for a goal at Victoria Park.

The Reds trailed 2-0 to goals from Jonathan Franks and Andy Monkhouse but reduced the deficit with a second half strike from James Gray to set up a frantic finish but Stanley couldn’t find a leveller.

Kayode Odejayi made his bow in red after signing on loan in midweek but it was the home side who started brightest, creating an opening inside the first minute of the game. Franks crossed from the right and Andy Monkhouse rose highest but guided his header off target.

It was a sign of danger to come as James Beattie’s side started sluggishly, presenting striker Luke James with a chance to get one on one in and open the scoring. The Pools man failed to oblige, dragging his effort wide of Marcus Bettinelli’s goal.

Odejayi was proving to be an asset and his hold up play was dangerous but the Reds failed to test Scott Flinders in the home goal with George Miller shooting over and Gray dragging an effort wide.

The home side edged in front just shy of the half hour mark when Monkhouse found Franks inside the box and the former Middlesbrough trainee guided his shot into the bottom left hand corner.

Stanley threatened to respond but a diving header from Tom Aldred bounced into the floor and over the bar moments before Hartlepool netted their second. This time Stanley failed to deal with a ball in from the left allowing Matty Dolan to let the ball run to Monkhouse who capitalised from inside the area.

After the break Bettinelli made important contributions to deny Colin Cooper’s team a third, thwarting Monkhouse and Franks before Beattie’s team found their way back into the game.

Inevitably Odejayi played a part, knocking the ball down to Gray on the edge of the area and giving the Northern Ireland under 21 striker a chance to get beyond a defender and into the box. The forward obliged, finishing with aplomb for Stanley’s first goal in seven games.

Moments later Gray had another chance from Odejayi’s flick but sliced this one wide before at the other end Hartlepool sub Steve Howard fired inexplicably over after Aldred had blocked a strike from Franks.

Hartlepool, like Stanley, were looking for their first league win of the season and as time wore on they became more and more nervous. Luke Joyce saw a low shot blocked by a defender before sub Connor Mahoney saw Flinders parry his left foot strike as stoppage time loomed.

There were four added minutes and more beyond that after a home player required treatment but Peter Murphy could only head a Kal Naismith corner over, sub Will Hatfield stab the ball wide and Flinders was then on hand to throw himself at the ball to deny a late flourish. 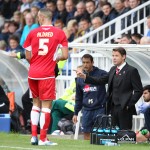 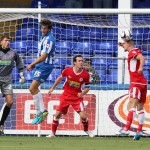 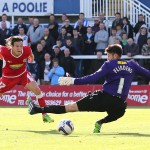 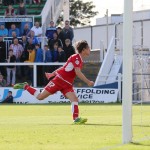 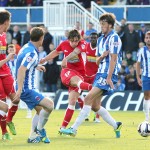 Gray’s attempts at a second goal are thwarted KIPAX 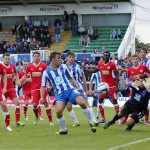