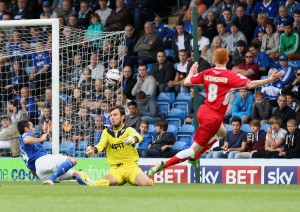 Michael Richardson fires into the side netting KIPAX

Injury hit Stanley suffered another undeserved defeat in a lively contest against Chesterfield at the Proact stadium.

It was a match between two sides who have experienced contrasting fortunes so far this season.

Managed by former Stanley bosses Paul Cook and Leam Richardson, Chesterfield were riding high with 13 points out of the opening 15 available, and Stanley suffering five consecutive defeats in all competitions.

Stanley striker Danny Webber came closest to opening the scoring when his close range effort was clawed to safety by Tommy Lee in the home side’s goal.

The Reds went into the game minus key defensive personnel but in the opening stages  defended resolutely.

As expected, the league leaders grew into the game and their midfielders began to cause Stanley problems.

Midway through the first half, defender Sam Hird latched onto a good ball over the top but fired his shot high and wide.

Former Port Vale frontman Marc Richards also had a great opportunity to net his third goal of the season but uncharacteristically hit his effort over the bar from yards out after capitalising on a defensive mix-up.

Despite Paul Cook’s men dominating possession, the match continued to be entertaining and both sides could have scored an opener.

Captain Luke Joyce saw his free-kick blocked but a lightning quick Chesterfield counter-attack followed and resulted in Jimmy Ryan blasting over from the edge of the box.

James Beattie was forced into a substitution just shy of the interval as Will Hatfield replaced lone striker Danny Webber.

Michael Richardson should have opened the scoring on 43 minutes when he shot into the side netting after being fed by Hatfield down the right.

The Lancashire side were soon made to rue that missed opportunity as Chesterfield took the lead almost from the re-start.

Mark Richards’ shot from the left side of the penalty area cannoned off the post but Tendayi Darikwa powered home the follow-up.

The Spiriteies could and should have extended their lead a short time later.

Moments later, Talbot reached a perfectly weighted corner but saw his header cleared off the line.

To their credit, the visitors, without a goal scored in five games, kept pushing and brought on man of the moment Connor Mahoney.

In what felt like reversal déjà vu, when Gnanduillet came on for Chesterfield, the 16-year-old almost made an instant impact for the Reds but his clever cross was just diverted away.

With 15 minutes remaining, skipper Luke Joyce was relieved to see Gnanduillet’s effort fall into the hands of Marcus Bettinelli after he conceded possession.

Stanley were unfortunate not to be awarded a penalty when Robert Atkinson appeared to be fouled after Joyce’s free-kick caused mayhem in the hosts box but Mahoney played on but saw his shot held by Lee.

In stoppage time there was a let off for Stanley as Eoin Doyle found himself one on one with Bettinelli, hit the crossbar and Sam Togwell’s rebound was blocked. 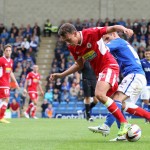 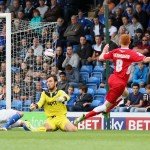 Michael Richardson fires into the side netting KIPAX 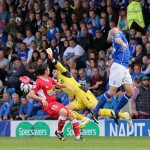 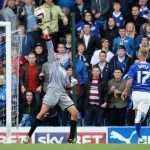