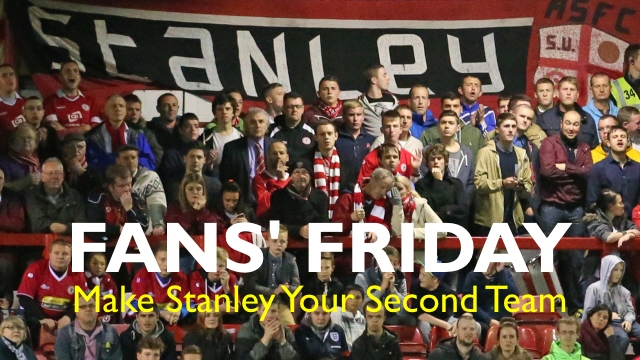 1751 people heeded the call and came through the turnstiles, with the initiative creating a buzz both nationally and locally.

Fans’ Friday is BACK, with season ticket holders for any Football League club able to buy an adult ticket for Friday’s game with Scunthorpe United for JUST £10!

And after the success of the last Fans’ Friday we’re setting ourselves a couple of little challenges for the second edition – to try to get over 2000 supporters through the turnstiles and attract a season ticket holder from all 92 Premier League and Football League clubs.

To reach the 2K mark we’ll need to borrow all of the season ticket holders from other clubs that came last time and more – so please, make Stanley your second team and join us on Valentine’s night.

And you can have your name here on the club’s official website and on our official Twitter feed by being the first season ticket holder from your club to get your ticket – we’ll be placing a Hall of Fame online to recognise those supporters who join us.

“A good initiative that other clubs could do well to follow,” – Lee, Leyton Orient supporter

Even if you’re not a season ticket holder you can still join in the fun – in the recent BBC price of football survey Stanley was found to be the cheapest day out in League Two!

*All discount ticket must be purchased in advance from the Store First Stadium upon production of a season ticket from another Premier League or Football League club. These tickets are available until kick off from the ticket office.

“The fans are good and it’s a great atmosphere behind the goal,” Alastair, Rochdale supporter

The Fans’ Friday Hall of Fame

Get your name next to your club – buy your ticket and register your details, then tweet @ASFCofficial a picture of you in your club’s shirt!