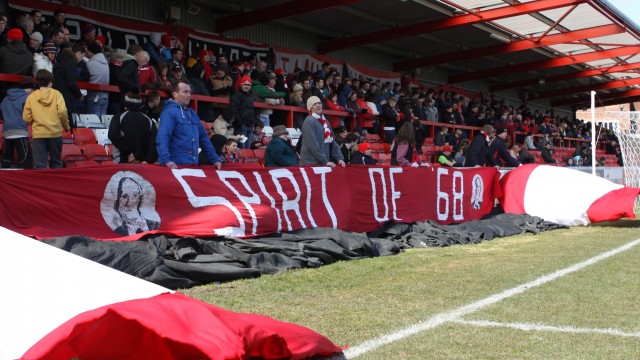 Accrington Stanley is one of football’s oldest names. This is a brief summary of the club since the reformation in 1968.

1970-71 Stanley enter the Lancashire Combination. A crowd of 620 watch the team in their first game, beating Formby. Terry Tigle played in the first match, the only player to play in both the old and new Stanley teams.

Alan Davies remembers his winner in that famous first game (link in image):

1971-72 The club wins the League Cup defeating Ashton Town in the final and lift the Combination Cup after beating Nelson. Stanley also finish runners up in the Lancashire Combination.

Ian Wilcox was proud to captain the Reds (link in image):

1972-73 Problems with the pitch at the Crown Ground force Stanley to return to their former home of Peel Park for a game against Nelson, watched by a crowd of 708, a small number compared to the thousands that had followed them at the same ground in years gone by. The club retains the Combination Cup.

1973-74 Stanley win the Combination Cup for the third year running and also finish league champions in the Lancashire Combination.

1975-76 Further pitch problems at the Crown Ground lead the club to consider a permanent move back to Peel Park, though this was not to be. Despite these problems Stanley finish runners-up to Bootle, scoring 104 goals in the season. David Hargreaves was the club’s top scorer for this season scoring 56 goals in 44 games, a club record that has yet to be broken.

Board member David Stanley talks about the developments at the Crown Ground (link in image):

1976-77 Stanley finish third in the league after going unbeaten in 27 games at the start of the season and only losing 2 matches throughout the year.

Goalkeeper Mick Finn says this was the ‘start of something special’ (link in image):

1977-78 Once again the club wins the league championship. David Hargreaves moves to Blackburn Rovers after scoring 318 goals for Stanley, another record that still stands today.

1979-80 Finish runners-up in the division but denied promotion due to pitch problems.

1983-84 Stanley elect to play in the newly formed North West Counties League. The club spend £40,000 to improve the pitch that had caused them so many problems in the past. Lost to South Liverpool in the ATS Challenge Trophy Final.

1986-87 Floodlights installed ready for a move into the Northern Premier League First Division. Finish runners up to Stalybridge Celtic.

1992-93 Stanley reach the Second Round Proper of the FA Cup. A Paul Beck hat-trick secures victory for Stanley in the First Round against Gateshead, watched by 2,270 at the Crown Ground. Sadly Stanley lose 6-1 against Crewe Alexandria in the following round played at Blackburn’s Ewood Park ground, cheered on by 10,801 – the highest FA Cup attendance of the day.

1993-94 Once again Stanley progress to the First Round Proper, this time losing to Scunthorpe United who score after five minutes of injury time to beat Stanley 3-2 at Burnley’s Turf Moor ground. Things were much worse in the league, the club narrowly escaping relegation after Eric Whalley returned as manager and turned things around, losing only three of the last eighteen league games.

1994-95 David Hamiltion is appointed team coach but moves to a full time position at Preston North End in January 1995. Eric Whalley gains a controlling interest in Accrington Stanley and is appointed Chairman. Immediately he sets about improving the ground, with £50,000 being spent on new terracing. During the close season the squad fly out to Barbados where they win the Anglo-Barbados Cup.

1996-97 Stanley reach the ATS final for the first time since 1983-84 but lose again, this time 3-0 to Southport at Preston North End’s Deepdale ground.

1998-99 Finish bottom of the Unibond Premier Division despite a late fight after the appointment of Wayne Harrison as manager, who leaves for Blackpool during the close season.

1999-2000 John Coleman and his assistant Jimmy Bell are appointed after leaving Ashton United and immediately take Stanley back up to the Unibond Premier Division as Champions. On his arrival John Coleman built a virtually new side, which never lost a game from the new year to the end of the season. The Championship is collected in front of a record crowd of 2,468.

2000-2001 Their first season in the Premier Division sees Stanley finish ninth in the table and they reach the semi-final of the Presidents Cup. More improvements are made to the Crown Ground with works on the pitch and floodlights. Stanley win the Marsden Trophy (Lancashire County Cup), beating Barrow at Morecambe and they also win the Unibond Challenge Cup by beating Bradford Park Avenue on penalties in a two-legged final.

2002-03 Stanley enjoy their most successful season ever by clinching the Unibond Premier League title in April with a 3-1 victory over Altrincham in front of 2263 fans – attaining their highest ever finish since reformation in 1968 and finishing on 100 points, scoring 97 goals. The Reds also retain the Peter Swailes Charity Shield.

2003-04 Stanley finish a creditable tenth in their first season in The Nationwide Conference and enjoy their best ever FA Cup run, beating two Football League Clubs before losing to Colchester in a Third Round replay.

2004-05 Stanley again finish in tenth place, again qualifying for The LDV Trophy and once again win The County Cup, beating Burscough in a two-legged final.

2005-06 Stanley win The Nationwide Conference Championship by eleven points and with it earn promotion to The Football League.

2006-07 Stanley return to The Football League after a gap of 44 years, playing their first game at Chester City. Benin international Rommy Boco is the club’s first Football League goalscorer since Mike Ferguson with a brace in the opening league win over Barnet.

2009-10 The Reds enjoy another FA Cup adventure, hosting Premier League side Fulham in the fourth round, narrowly losing out 3-1.

2010-11 After three seasons of improving their position in League Two, Stanley finish fifth in the division to make the play-offs, but are unfortunately beaten in the semi-finals by Stevenage.

2011-2012 John Coleman and Jimmy Bell leave the club for Rochdale, with former Stanley player and coach Paul Cook coming in as the new manager, assisted by long-serving defender Leam Richardson.

2012-2013 Cook leaves to become the new manager of Chesterfield, with Richardson again stepping in and winning his first game in charge against Bristol Rovers, securing league football for another season in April.

2013-14 Former England striker James Beattie becomes the new man in charge at the newly named Store First Stadium ahead of the 2013/14 season after Richardson departs for Chesterfield.

2014-15 Beattie leaves the club in September, heralding the return of John Coleman and Jimmy Bell. The Reds come agonisingly close to an FA Cup tie with Manchester United before finishing 17th in League Two to set up a tenth consecutive Football League campaign.

2015-16 Stanley are taken over by local businessman Andy Holt in October and he pays off outstanding debts which have hampered the club. The Reds enjoy a prolific season, scoring in every home game of the League Two campaign until the final game of the season, when a goalless draw against Stevenage meant they missed out on automatic promotion on goal difference and finish fourth. They lose to AFC Wimbledon in the play-off semi-finals.

2016-17 A rebuilding season for the Reds as they lost a number of players including Josh Windass and Matt Crooks to Rangers in the summer. They finish 13th.

2017-18 A historic season for Stanley as they won promotion to League One for the first time. The Reds suffered five successive defeats at the end of 2017 but then never looked back – winning 18 of their remaining 22 league games. They clinch promotion at home against Yeovil and lift the champions trophy at home against Lincoln in the penultimate game of the season. Billy Kee finishes the season with 26 league goals and wins the Golden Boot. Aaron Chapman wins the league’s Golden Glove after keeping 18 clean sheets.