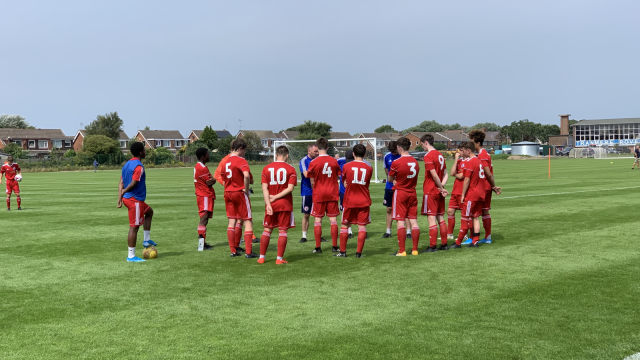 Second half substitutes Jak McKinlay and Mitchell Nolan’s late goals secured the victory over Tranmere Rovers to give Accrington Stanley Under-18s the perfect start to the 2019/20 season.

McKinlay’s incredible run from midfield provided him with the opportunity to slot past a rooted Rovers goalkeeper.

Again in the action, McKinlay found himself driving towards the Rovers goal before being brought down just outside of the penalty area, which allowed Nolan to curl his free-kick into the top corner.

The excitement of the new season was visual from both sides as Stanley were awarded an early penalty giving captain Charlie Ridge the chance to open the scoring, but his effort was parried back to striker Gabe Ellis who cushioned it home.

After a defensive mistake, Liam Isherwood picked up a back pass leaving the referee no choice but to award an in-direct free-kick, with everyone on the line, Stanley managed to stay strong and clear the ball.

Stanley were again causing the Rovers defence problems, with a long ball over the top landing at the feet of Luke Stowe, who unluckily saw his first time effort cannon back off the crossbar.

Rovers managed to break through Stanley’s defence four minutes from time, but their late strike was only to be a consolation.

Under-18s manager Paul Lodge said: “Well, obviously we are delighted, the lads have travelled to Tranmere in the first game of the season, it is never easy to come here and we’ve scored three goals.

“We are only disappointed with that we’ve conceded a goal late on, ideally we could have been consolidating but we’ve found ourselves out of shape and been hit on the counter.

“We had a couple of niggles, there were some tough challenges in the first half, but we brought Jak McKinlay and Mitchell Nolan on.

“For somebody in his first year, I thought Jak changed the game, he was absolutely outstanding and scored a great goal.

“To be fair to Mitch, he was disappointed he wasn’t starting, but he has been practicing those free-kicks all summer and he has executed it perfectly into the top corner.”

Stanley Under-18s will next be in action on Saturday 10th August as they host Salford City.