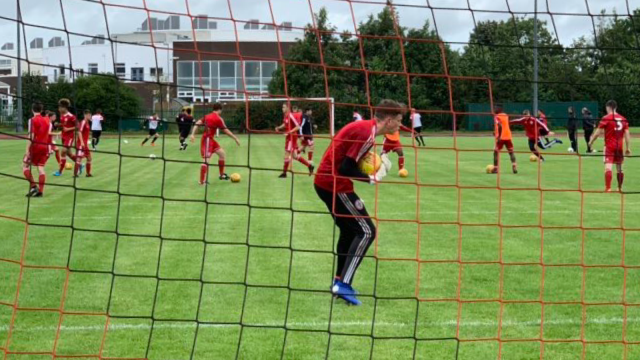 Accrington Stanley Under-18s snatched all three points on a wet morning at the Barden Athletics Arena thanks to a low-driven strike from full-back Jack Bolton.

Salford started the game on the front foot, creating an early chance from a quick free-kick which was played into the striker but he couldn’t keep his shot down enough to trouble Liam Isherwood.

The Reds first goal of the game came 16 minutes in, a long kick from Isherwood gave forwards Charlie Ridge and Gabe Ellis the chance to pressurise the Salford defence.

A mix-up in communication between the Salford goalkeeper and his central defenders led to the number one passing the ball into the back of his own net.

After a nervous start from Stanley, captain Ridge was continuing to try and open his account for the new season, causing problems in the penalty area as two of his shots were well blocked by the Salford defence.

The constant wave of attacks resumed for both sides, as Ellis used his strength and pace to gain a corner, but from the following set-piece it allowed Salford to counter before the forward dragged his shot wide.

As the conditions got worse, Isherwood’s goal-kick went out for a throw-in, which was taken quickly by Salford and caught the young Stanley defence on their toes as they equalised 10 minutes before half-time.

In similar fashion to the opening 10 minutes of the first half, Stanley couldn’t get out of the blocks with Isherwood coming to the rescue to prevent Salford taking the lead.

An enforced substitution saw defender Ryan Graham replaced by Rigo Madzura, as moments later a charging run from full-back Bolton saw him enter the box before seeing his shot deflect off the defender and into the net to give Stanley the advantage.

The changes came thick and fast for the Reds as Daniel Martin was withdrawn following a late collision with the Salford midfielder, with Ryan Muldoon coming on in his place.

Then both forwards Ridge and Ellis were given a rest for their hard work in tough conditions, with Kevin Spinelli and Warren Sung replacing the pair.

With their lead well in tact, Stanley used the clock to their advantage and cemented their second win of the new campaign with a 2-1 victory.

Full-back Jack Bolton said: “I thought we saw the game out very well and we ran the clock down to suit us.

“I know it was quite end to end in terms of possession, but you’ve got to expect that considering the conditions.

“It wasn’t the prettiest of games, but in the end we got the three points and that’s all that matters.

Despite the deflection off the defender, Bolton is still adamant that he claimed the winning goal.

“I’ll take that one, it wasn’t the best of goals, the power of the deflection helped.

“The only negative was that we didn’t keep a clean sheet.

The full-back also added that he is being encouraged by the Academy staff to push forward during attacks.

“Ryan Muldoon and myself are two full-backs that are always encouraged to get forward and specifically in the team talk before the game we were told to get up the pitch as much as possible considering we were at home.

“By doing so, we wanted to stay on the front foot whenever possible and put them under pressure.”

Stanley Under-18s currently sit joint-top with Preston North End in the EFL Youth Alliance North West league and they will next be in action on Saturday 17th August as they travel to face Shrewsbury Town.