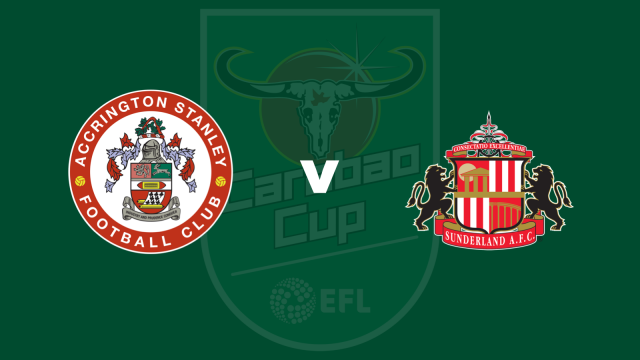 Late goals from Aiden McGeady and Charlie Wyke were enough to see Sunderland to a 3-1 defeat over Stanley, despite Colby Bishop’s second half penalty.

The game began at a quick pace with both sides having multiple half chances, with midfielder Sam Finley having the best chance of the opening 10 minutes.

However, it was the visitors who opened the scoring on 17 minutes when the ball fell to Marc McNulty and the striker made no mistake as he slotted past Dimitar Evtimov.

Stanley’s best chance of the first half came seven minutes later when new signing Courtney Baker-Richardson slotted the ball past goalkeeper Lee Burge towards Bishop, but the latter slipped over and the ball got stuck underneath him.

Sean McConville came close just after the half hour mark as his free-kick flew just over the crossbar, following a foul on Jordan Clark.

John Coleman’s side started the second half the better of the two sides, and they got their reward on the hour mark as Clark was brought down inside the box, with the referee then pointing to the penalty spot.

Bishop stepped up and sent Burge the wrong way to grab the equaliser and his first competitive goal for the club.

McNulty must have thought he had grabbed his second goal of the game on 76 minutes, but his effort came crashing back off the crossbar.

The visitors regained the lead four minutes later as substitute McGeady raced towards goal before slotting past Evtimov, with Wyke grabbing the third goal in injury time to secure the win for The Black Cats.

Next up for Coleman’s side is a trip to London to face AFC Wimbledon on Saturday 17th August, 3pm kick-off.