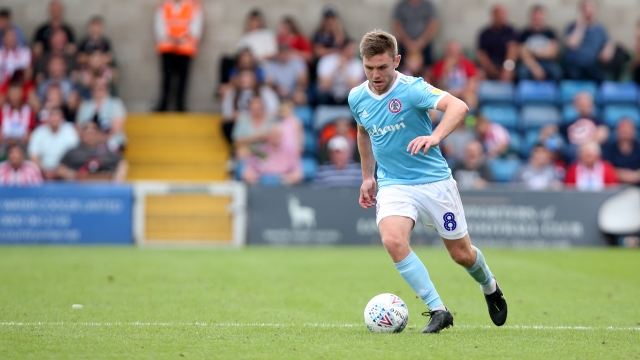 Midfielder Sam Finley says the full focus is now on Sunderland in the Carabao Cup as they look to chalk up their first win of the new season.

An opening day defeat at Lincoln City was disappointing for the Reds while there is frustration that Saturday’s first home game of the 2019/20 season against Bury will not go ahead.

The midfielder insists they are now all looking at the first round cup game against their Sky Bet League One rivals on Tuesday at the Wham Stadium to kick off their season.

The 26-year-old said: “It’s a nightmare not playing this weekend, not being able to put the Lincoln defeat right.

“You just want to get back playing but we have Sunderland on Tuesday and that will be a big game.

“It’s the first game at home, it’s the first time we will play on the new pitch and I can’t wait to play on it.”

Stanley owner Andy Holt has spent a lot of money levelling and relaying the pitch over the summer and Finley says it will be vital to the way the Reds play.

“We have all seen it now and we are looking forward to playing on it. I don’t think Andy Holt will have any complaints this season about the state of our pitch!”

Last season, Finley was one of the new boys but he is now in his second season with the club and has been the one welcoming the new players into Stanley life.

“I settled in well when I first came, after the first two or three months I felt it was my home and it’s good to have new faces coming in this season.

“The gaffer is always looking to improve year on year and hopefully we can do that this season.

“Colby (Bishop) is a school teacher, he is quiet at the moment!

“We know team spirit takes us a long way, that’s what the gaffer prides himself on.

“He brings the right players in – that’s team spirit and character – he doesn’t want any bad eggs in the changing room. I think he has done a good job again this season with it.”

Meanwhile Finley admitted lessons have been learnt from the Imps loss.

“I had never played at Lincoln before, they are a big side, their two centre halves were great in the air.

“I thought we played into their hands, we had a few debutants and I think we found it tough, we just never really stamped our authority on the game.

“We will learn a lot from it and the debutants will take time to gel.

“I remember the start of last season, in the first game we got beat by Gillingham, I was on the bench, and then we went on a good run of results until Christmas and hopefully it will be the same this season.”