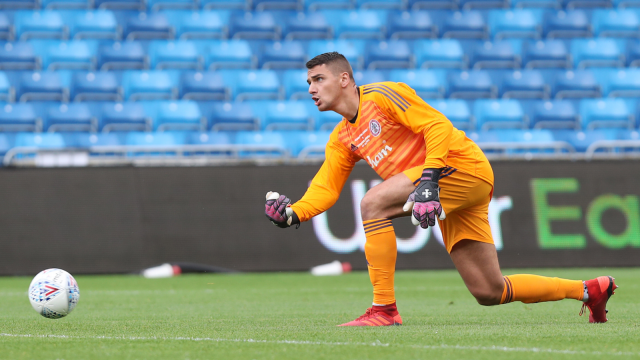 Accrington Stanley goalkeeper Dimitar Evtimov admits the competition in the goalkeeping department is keeping him on his toes.

The Bulgarian keeper, whose country comes up against England next month in the European Championship qualifiers, made a number of superb saves in the opening day loss at Lincoln City.

He is competing for the No 1 spot at Stanley with Stoke City loan stopper Josef Bursik, who signed last week, and Toby Savin, who has come through the Academy at the Reds.

“Josef lives with me in the house in Liverpool, he is a nice lad, young and very good with his feet. He has a lot of potential,” said the 25-year-old.

“He keeps me on my toes and it’s good for the team. It’s healthy for the team to have three goalkeepers all challenging.

“I am surrounded with good goalkeepers and they push me every day and hopefully I push them as well.”

Evtimov admitted he was frustrated with the Imps game and knows there is room for improvement from the Reds.

“It was pretty busy game for me, the first half was quiet but they had one shot on target and they scored a goal from a corner.

“The second half, the first 20 minutes, I was busy and had to make a few saves. We were still in the game but unfortunately we conceded a penalty late on.

“It was disappointing to lose the first game against a team who had just come up but they had the momentum carried on from last season after winning the league, we didn’t really create that many chances and we couldn’t score a goal.

“We have conceded from two set-pieces – a corner and a penalty – so we need to be better on set-pieces, we need to defend better.

“Attacking-wise, we needed to do better with our set-pieces, we didn’t look as threatening from set-pieces as we did last season so we need to improve that.

“We need to put it right in training and then get it right for Sunderland on Tuesday.

“It’s a massive game, it’s a Carabao Cup game and we want to go through to the next round.”

Evtimov is hoping he can keep his place in Stanley’s goal – but may lose it for one game with an international call. He got his first call-up to his country last season.

“I am waiting to see if I get a call-up to the Bulgaria squad which plays England, I should know in the next two weeks.  If I do well here, I could be called-up and that means I will miss Bristol Rovers. We will have to see.

“I am looking forward to every game, especially Burton Albion as I played for them at the first half of last season.

“It should be a good season – we just have to keep doing the right things.”