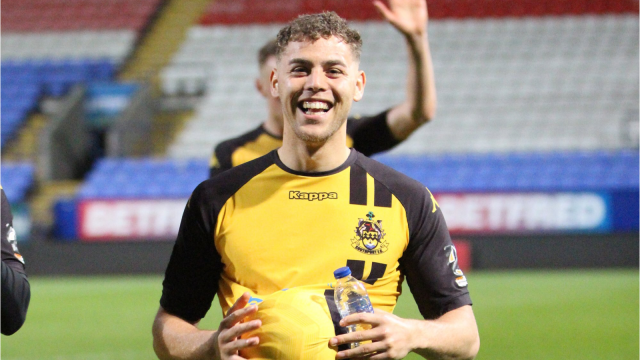 Charles: I want to seize my chance

Striker Dion Charles is relishing his move to Stanley after signing a two-year deal for an undisclosed fee with the Reds.

The 23-year-old striker has made the switch from National League North side Southport and admitted that he can’t wait to make the step up to Sky Bet League One.

“I need to repay the gaffer here as he has given me a chance, he has seen something in me and I need to show everyone else.”

Charles was a winger originally and only moved up front recently but it’s a change that he has benefited from.

“I was playing out wide and I only began playing up front towards the back end of the season.

“The manager, Liam Watson, changed my position and I did well and got a move here.

“I am quite pacey, direct and hopefully will get supporters on the edge of their seats.

“First and foremost though, I work hard for the team, I am hard worker and that’s been instilled into me from an early age.”

Charles began his career with Blackpool and had spells with AFC Fylde and Fleetwood Town before joining Southport.

“I had a good 18 months at Southport in the National League North and thankfully managed to get a move here.

“When I went to Fleetwood, I was young and naive but I have matured now and am looking forward to learning my trade as a striker here and I know the manager, as a striker himself, will help me.

“At Accrington, I know Sam Finley, who I was at Fylde with, and I was at Fleetwood with Joe Maguire.

“It’s always daunting going to a new club and if you see a few friendly faces it makes it easier.”

The striker is hoping to make his EFL debut this season and get some game-time during the 2019/20 season.

Charles hopes he can play a part tomorrow as the Reds take on Sunderland in the Carabao Cup first round.

“To feature tomorrow night would be what dreams are made of, a former Premier League club with a massive following.

“If I get on the pitch it’s a dream come true.”