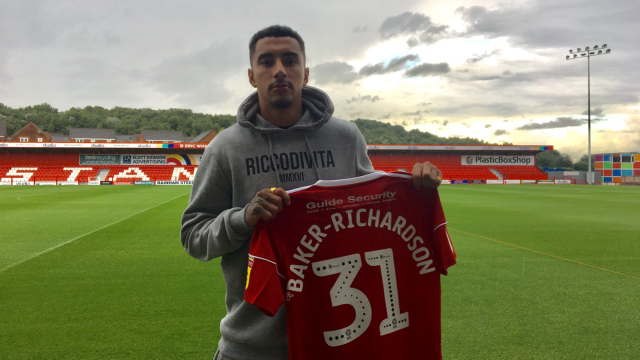 Accrington Stanley have today made their second loan signing of the summer as striker Courtney Baker-Richardson arrives from Sky Bet Championship club Swansea City on a season-long loan, subject to international clearance.

The 23-year-old began his career with hometown club Coventry City and he made his debut for the Sky Blues in December 2013 in a 1-1 FA Cup Second Round draw with Hartlepool United.

After leaving Coventry, Baker-Richardson had spells in non-league with Kettering Town and Leamington, and it was with the latter that the striker enjoyed a successful campaign during the 2016/17 season.

In the summer of 2017, the Coventry-born striker joined Swansea on a two-year deal and he made 21 appearances for the club during the 2018/19 season, scoring four goals and providing one assist.

Stanley manager John Coleman said: “He has got the opportunity to reignite his football career here.

“He is a good footballer, he has played games in the Championship and he knows what it is about at this level.

“He has height, he will be an aerial threat and he can get in the space behind, he ticks all the boxes for what we want.”

Baker-Richardson is Stanley’s eleventh signing of the summer transfer window and the striker will wear the number 31 shirt during his time with the club.

You can sponsor our new signing by contacting our Commercial team on 01254 356950 or by emailing commercial@leescarter.com.

To find out more about our sponsorship package click here.