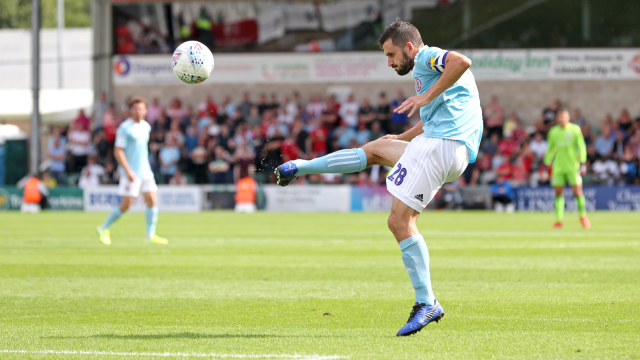 Seamus Conneely can’t wait for tonight’s game against Sunderland in the Carabao Cup first round as the Reds look to kick off their season.

But he knows this is a great game to bounce back in, with Sunderland expected to bring a bumper crowd to the Wham Stadium.

It’s also the first chance the Reds will have to play on the new £350,000 pitch – although they did train on it on Sunday.

“It was strange having a Saturday off, certainly this early on in the season, but the first home game is now Sunderland, on the new pitch with a big crowd,” said the 31-year-old.

“It’s a big game, so we are fully focused on that.

“All the fans starved of football throughout the summer will hopefully come out tonight.

“It’s a cup game, it will be decided on the night, so it should be a good atmosphere.

“Training on the pitch was good, it felt nice and you could see the changes which have been made. It’s been raised up and AstroTurf laid around the side of the pitch.

“We are a team which likes to play football so the pitch should suit us and it will be to our benefit.”

Conneely admitted that their home form is something they are concentrating on this season.

They won seven of their 23 league games at the Wham Stadium last season, losing 10 as the Reds finished 14th.

“Our home form needs to be better this season.

“We weren’t happy with our home form last season, we didn’t win enough games or score enough goals and that’s something we are looking to put right.”

With 12 new additions, it’s been a busy summer at the Wham Stadium and the new players will have to settle in quickly.

“There has been a big turnaround most years I have been here and this season, there have been quite a few lads who have left and quite a few come in and it takes time to gel.

“It does take a certain type of character to be successful here, you have to accept the limitations.

“The training ground might not be what they have had at other clubs and the ground as well, although there has been a lot of work on it.

“Lads who accept that are often lads who are willing to work hard, are big characters and will take setbacks in their side which are characteristics the management look for in a player.

“I think the success of the team is how quickly you gel as a team, you learn how each other plays and get used to each other’s attributes on the pitch.

“We had a decent pre-season, we had some good results, but it’s was very disappointing to lose our opening game at Lincoln.

“We weren’t good enough and we have admitted that to each other, we want to put it right.”

After tonight’s Carabao Cup game, it’s Sky Bet League One action at AFC Wimbledon on Saturday and Conneely is hoping for another strong season from the Reds.

“I want to target the top half and see where that takes us.”