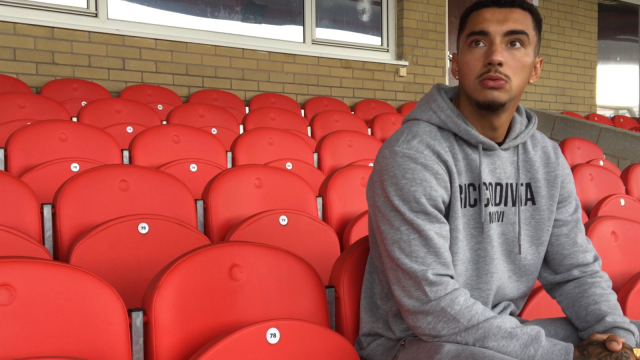 Accrington Stanley striker Courtney Baker-Richardson admits that conversations with owner Andy Holt and manager John Coleman proved crucial in his decision to join the club on a season-long loan deal from Swansea City this afternoon.

The 23-year-old met with Stanley’s owner and manager yesterday afternoon at the Wham Stadium and he expressed that he had heard a lot of good things about the club.

“I think it’s a great opportunity for me to come into Sky Bet League One, I know all about Accrington, I was up here yesterday talking with the owner (Andy Holt) and the gaffer (John Coleman).

“A lot of good has been spoken about the club and I’m happy to join.”

A familiar face for the Coventry-born striker in the Stanley squad will be fellow attacker Colby Bishop, with the two crossing paths at Leamington, and Baker-Richardson hopes that the two of them can form a partnership this season.

“He (Colby Bishop) was on the back end as I was about to leave, and I still follow Leamington to this day.

“It was a brief relationship but I know all about him, everybody has said he’s a good striker and hopefully we can form a little partnership.”

With no game this weekend, Baker-Richardson’s first game for Stanley could be against Sunderland in the Carabao Cup on Tuesday, and he admits that he’s looking forward to coming up against a good friend of his in Jordan Willis, who joined The Black Cats this summer.

“It’ll be a good battle, he’s (Jordan Willis) a very physical lad as well, he’s a bit smaller than me, but he’s renowned for being a good leader.

“It’ll be a good physical challenge so I’m looking forward to that.”

You can watch Courtney Baker-Richardson’s full interview below on the club’s official YouTube channel – ASFCofficial!