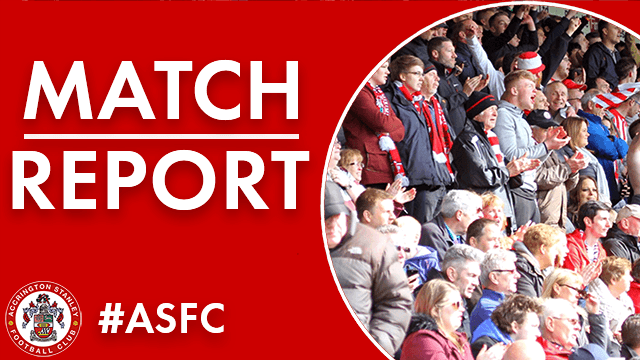 Stanley began 2019 with defeat against Bradford City at the Northern Commercials Stadium.

The Reds were beaten 3-0 by an in-form Bantams side after being reduced to ten men halfway through the first half.

Stanley fell behind in the 21st minute, Lewis O’Brien finding the top left corner from just inside the box, before Offrande Zanzala was shown a straight red card for a foul on the goalscorer five minutes later.

On the half hour, Eoin Doyle fired home to double the host’s lead following a good run into the box by David Ball.

Substitute Connor Wood made it three with a rifled shot from distance into the top corner five minutes after the restart as the hosts continued to press.

Manager John Coleman made one change to the starting line-up ahead of kick-off – Zanzala starting up top with Seamus Conneely on the bench.

Stanley began the game brightly with a succession of corners in the opening exchanges, but it was Bradford that opened the scoring after a corner of their own.

With 20 minutes on the clock, Jack Payne cut into the box from the left and saw his effort cleared over the crossbar by Mark Hughes.

From the resulting corner, O’Brien received the ball on the edge of the box and with time and space, curled a shot into the top left corner.

Stanley then had a man sent off in the 26th minute after Zanzala appeared to lunge for a loose ball, catching goalscorer O’Brien and was shown a straight red card.

Bradford made the man advantage count almost immediately, as Doyle made it 2-0 four minutes later.

Ball broke into the area from the right and flashed a shot across the face of goal, before the ball landed with Doyle inside the box, and he smashed his shot home through a sea of bodies.

Sam Finley almost got Stanley back into the contest, but his powerful shot from range came back of the bottom of the post with ‘keeper Richard O’Donnell beaten.

The hosts continued to press in the second half and Wood, on for the injured O’Brien, caught the Reds napping when there appeared to be no danger.

He drilled a shot from range through the Stanley defence and past Connor Ripley, into the top left to extend the host’s lead.

Connor Hall came off the bench and looked lively for the Reds, but Stanley were unable to force a way back into the match.