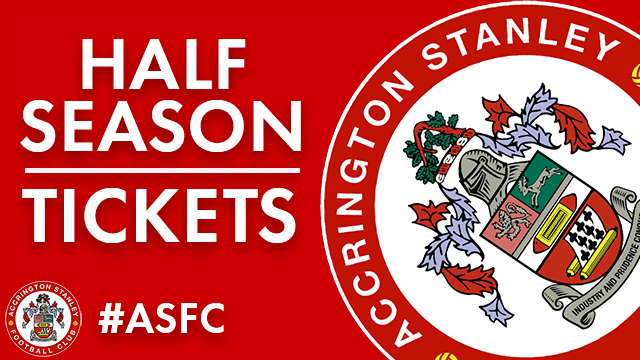 You can pick up the perfect Christmas present for the Stanley supporter in your life by purchasing a Half Season Ticket.

Following the massive success of being crowned EFL Sky Bet League Two Champions, the club announced record breaking sales for Season Tickets ahead of the 2018/19 League One campaign.

Now, after the terrific start to the new season with Stanley in their highest league position for 50 years, the club is pleased to announce that Half Season Tickets can be purchased for the HML Recycling Jack Barrett Stand (seating) and WM Dyer Electrical Clayton End (standing) at amazingly affordable prices.

Supporters also can purchase a Half Season Ticket on a payment plan via the club’s finance partners Zebra Finance (subject to status). – This can be done here.

The 2018/19 Half Season Ticket for EFL Sky Bet League One will commence with Stanley’s home game against Peterborough United on Saturday 29th December and will include a total of 11 fixtures, including the visits of Coventry City, Luton Town and mouth-watering derby games at the Wham Stadium against Rochdale, Blackpool and Fleetwood Town.

Daniel Bowerbank, Accrington Stanley Commercial Manager said: “With record breaking Season Ticket sales in the summer and the growth of the fanbase, purchasing a Stanley Half Season Ticket is the perfect gift for family members or friends, at an affordable price for every age group.

“The support of the local community is paramount to the club’s ongoing development, success and its continuing growth. We want everyone to enjoy the special atmosphere that a matchday at the Wham Stadium brings.”

Half Season Tickets are on sale from the Stanley Store at the Wham Stadium, by calling the ticket office directly on 01254 35950, or via post at Accrington Stanley Football Club, Wham Stadium, Livingstone Road, Accrington BB5 5BX.

Supporters can also purchase a Half Season ticket on finance.