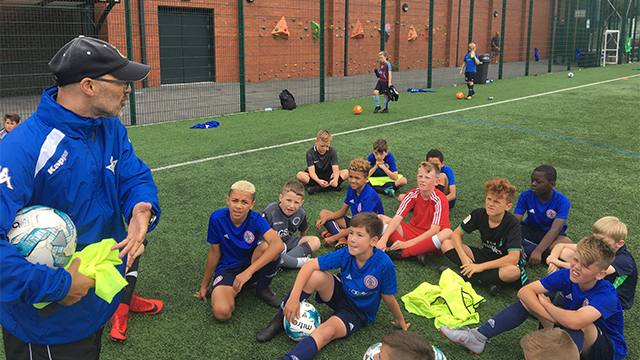 Young footballers from across Lancashire, including members of Accrington Stanley’s academy, have been enjoying a visit from Real Betis youth staff this week.

Players who will be in the U7-U15 age groups for the 2018/19 season (currently Year 2 to Year 9) are taking part in the week-long camp, with football drills led by the Betis academy coaching staff and supported by senior coaching staff from the Stanley academy.

The sessions are taking place at Accrington & Rossendale College and it’s not just the youngsters who are learning, with both clubs benefiting from the exchange of ideas.

Ash Hoskin, Head of Recruitment at Stanley’s academy, has been delighted with how the week has gone so far.

“It’s been terrific, absolutely fantastic,” he said. “There’s been some great ideas from the Spanish lads, our coaches have mixed with them very well and the kids have taken on what they’ve been saying.

“It’s different in terms of looking at the way they do things and the kids have bought into it.

“It’s been a terrific week, and the weather has been great as well which is really good for them.”

“It’s a good opportunity for Accrington Stanley and Real Betis to work together in the same way and to try to share the methodology between the different coaches,” the Spaniard said. “It’s a good way to improve the level of the coaches and the players as well.

Martin feels that the week-long camp has other benefits that will help improve the coaching even further.

“The language is important too, because we can improve the level of our English,” he continued.

“We try to teach the players some Spanish words too and the Accrington coaches have spoken a little bit of the language too.

“Of course, the coaches here at Accrington help us to do the best on the field.”

The Spaniard has even been pleased with the English weather this week, but he admits this is for professional reasons rather than personal ones.

He said: “This time of year in Seville it’s around 45-48 degrees, it’s very different.

“To work in this weather is very nice because when it’s too hot the players tire more, and they need to drink more and to do the drills is better in this weather, but it’s not my favourite weather!”

Youngsters Sam, Kieran and Noel have had fun taking part in the sessions and feel the week has been very beneficial to their development as players.

“It’s been very good,” Sam said. “I’ve enjoyed it and the Spanish coaches have been really good for all of us.”

“It’s a great experience because you learn how they play in Spain and we can adapt it into our game and they’ve learned how Accrington play too,” Kieran continued.

The academy camp continues on Thursday before concluding on Friday afternoon.

Words and photos by Euan Holden.