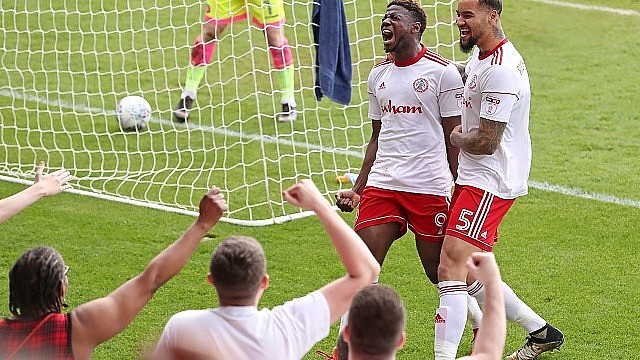 Offrande Zanzala celebrated his first league goal – and admitted a tough early life makes it all the more special.

The Derby County loan striker got a rare chance to enter the pitch at Wycombe with Stanley 3-0 up and John Coleman giving all his substitutes a run out during the final six minutes.

Zanzala replaced regular penalty taker Billy Kee and so, when he was brought down for a penalty in injury time, he was determined to take it himself.

He slotted it home and admitted, after growing up in the war-torn Democratic Republic of Congo and fleeing to Austria aged three before settling in London when he was eight, this was the highlight of his career so far.

“That was the chance I have been waiting for,” smiled Zanzala, 21. “Since I have come in January, the team has been incredible so I have had to wait for my chance. Being on the bench is part of the game and you have to be ready to come on and stay focused.

“Coming on at Wycombe,  it was incredible and it’s a moment that will probably live with me until I die, one of those moment where I couldn’t believe it myself when the ball hit the back of the net.

“Jordan Clark wanted to take the penalty so I had to beg him and then the captain Seamus Conneely helped.

“Everyone was stood behind me saying ‘good luck’, I didn’t know what to do when it went in, I just ran to the crowd. I was overwhelmed.

“I have been thinking about scoring my first league goal since I was very young, its happened with a great club with a great history.

“Now I feel I have played my part in the promotion, I have contributed and scored a goal and that feeling walking back when you have scored your first league goal, it’s amazing.”

Zanzala said his family were watching on Twitter while Ben Richards-Everton said the striker was dancing and taking photos in the dressing room immediately after the win.

“I grew up in DR Congo and it wasn’t the easiest of upbringings, I was shot at and saw things I would never wish on anyone but my dream was always to play football and this has been a happy day.”