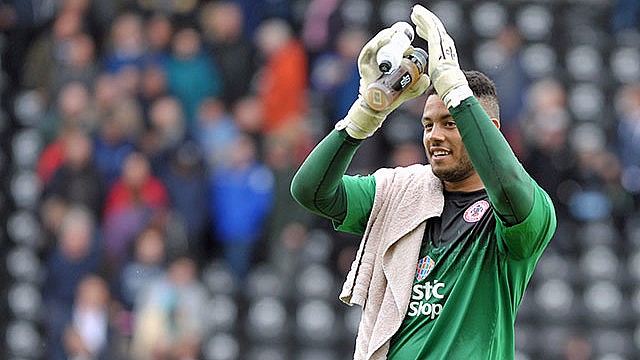 ‘I was lucky’: Chappy

Aaron Chapman admitted the emergency services said he was lucky to escape unscathed from a road traffic accident on his way to Monday’s game.

The goalkeeper was travelling on the M1 when he skidded in the snow and a truck hit his car, which was written off.

The 27-year-old escaped with just a graze to his finger but did go to hospital as a precaution.

“It was scary,” said Chapman. “I was in my car coming to the game and there was a lot of snow. My car skidded and hit a barrier. The next thing I know a lorry hit my doors. It was all so fast.

“The police couldn’t believe I had walked away from it with hardly a mark. They said they had been to a number  of similar incidents that morning.

“Someone up there was looking after me and I live to fight another day.

“I had a CT scan and then went home and watched the results come in. I was told to watch out for signs of concussion and this is my first day back in training.”

Jonny Maxted came in for his league debut and kept a clean sheet in the 1-0 win over Notts County.

“Jonny was unbelievable,” said Chapman. “I was desperate to play and even tried to get a taxi to the game but I am pleased for Jonny and it shows the competition we have for places.”