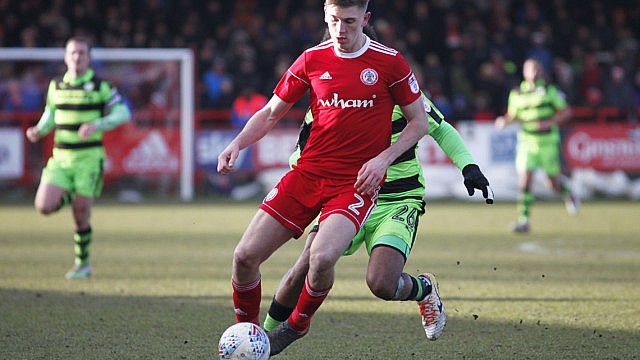 There’s still work to do: Dunne

Jimmy Dunne says he couldn’t possibly have imagined how well his spell at Stanley would go but knows that he still has work to do.

The defender, on loan from Burnley, has made 14 appearances for the club since joining in January and has yet to taste defeat.

The Reds have kept nine clean sheets in that time, and Dunne is focused on recording even more before the end of the season.

The 20-year-old said: “If someone had said to me before joining ‘how well do you want it to go?’, I probably wouldn’t have even shot this high! But so far, so good. It’s probably gone as well as it could go.

“I came here for the experience of getting games and trying to develop my defending. I never took into consideration that we might be where we are at this moment in time.

“There are six games left and there’s a lot of work that still needs to be done. If I want to enjoy the summer and be pleased with myself, then I need to keep up the clean sheet tally and keep winning games.”

Dunne received his first international call-up to the Republic of Ireland U21 set-up in March thanks to his performances for the Reds, but has kept his feet firmly on the ground.

Stanley host Exeter City at the Wham Stadium on Saturday, knowing that a win would guarantee automatic promotion to League One.

“Everyone talks about promotion, the fans, the players, everyone,” said Dunne. “But the more experienced players, the ones who have been through these kind of situations before are saying ‘listen, things can change quickly.’”

“There is a big job that still needs to be done, and we’re not getting too far ahead of ourselves. We have to win on Saturday.

“It doesn’t really matter who we’re playing this weekend, because our situation would be the same. We’ve got home advantage and I don’t think we’ll worry too much about what Exeter will bring, we’ll be focused on ourselves.”

The Reds were on the verge of automatic promotion two years ago, but narrowly missed out after being held to a goalless draw at home against Stevenage on the last day of the season.

Seamus Conneely, Sean McConville, Scott Brown, Mark Hughes and Billy Kee were all part of the Stanley squad that day, and have made sure their teammates are keeping a level head.

Dunne said: “I’ve spoken to Seamus about what happened two seasons ago, and he still feels sick talking about it, but the lads that were here then know what a horrible feeling it was to come so close and they are really eager to not let that happen again.

“The players are focused on winning promotion. If we achieve that then we’ll see how we are and then try and go on and win the league, but promotion is what we’re talking about in the changing room.

“The lads have got their heads screwed on. They know what job we need to accomplish. It’s not going to be easy but the lads know what we need to do.”