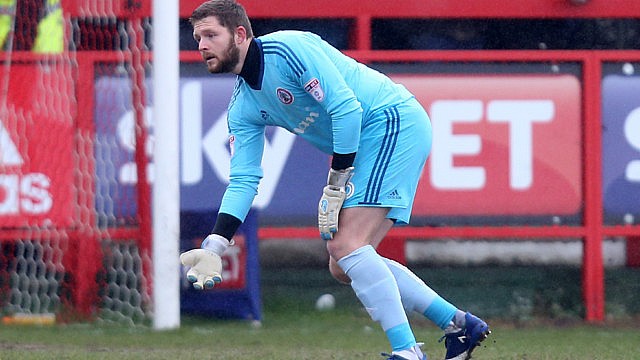 Goalkeeper Jonny Maxted says that the Accrington Stanley squad is the best he’s ever worked with, after keeping a clean sheet on debut in the 1-0 win over Notts County on Monday.

The shot-stopper has had to be patient since joining the Reds from Guiseley in January, but was pleased with his performance as Mark Hughes’ strike saw Stanley continue their automatic promotion push with a ninth straight home victory.

Maxted has previously had spells with Forest Green Rovers, Hartlepool United and Doncaster Rovers, but Monday’s game was the ‘keepers first start in an EFL competition.

“I’ve been a part of promotion teams before, but this is by far the best I’ve been involved in,” said Maxted. “Our lads look after each other, and that’s the best thing you can have.

“Everyone has got their own part to play. If someone isn’t quite doing it, someone else will step up and do it and look after them on the pitch. If you keep going the lads will look after you and you’ll look after them.

“I’m over the moon with the clean sheet. The lads worked hard and I am really pleased.

“Obviously it’s one of those things with Chappy not being here, but like I’ve been saying to everyone, I’m ready to work and when I’m needed I can go out and do the job.”

Maxted was told he was starting only an hour before kick-off, following the news that Aaron Chapman, who’s made 43 appearances for the club this season, had been involved in a minor car crash en route to the Wham Stadium.

“I text him before saying that I hoped he was alright,” said Maxted. “He replied saying ‘good luck, have a clean sheet’. As goalkeepers we’ve got a tight bond with each other and we work with each other every day.”

The 24-year-old is not getting carried away, either with himself or with Stanley’s promotion chances, but insists he is ready if needed.

“I’ve been raring to go since I got here,” said Maxted. “I want to be playing, but I’ll help out the team as much as I can. Getting put into the team is what I’m here to do, and I have to do the job when called upon.

“We’re not getting ahead of ourselves. We go into the next game and prepare right for that.”