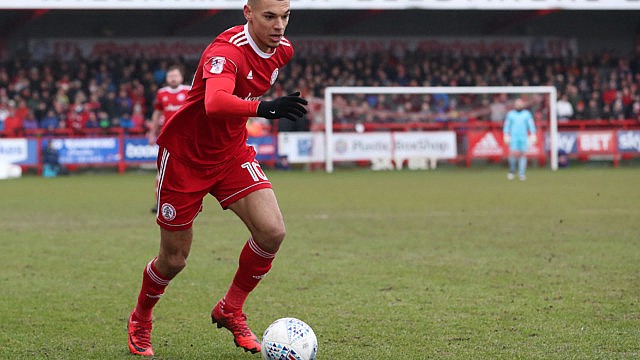 Kayden Jackson admits that there were some feelings of disappointment after the 1-1 draw with Exeter, but says there are plenty of positives to be taken from the game.

A win would have guaranteed Stanley League One football next season, but the Reds remain top of the table with five games left to play, knowing that victory against Yeovil on Tuesday will clinch promotion.

In an exciting contest at the Wham Stadium on Saturday, Jayden Stockley put the visitors ahead in the 21st minute, before Jackson’s 15th goal of the season levelled things up seven minutes before half-time.

John Coleman’s side hunted for a winner in the second half but were forced to settle for a point against resilient Exeter defence.

“I think we’re all slightly disappointed,” said Jackson. “It could have been a big day with a good atmosphere.

“We have to see the result for what it is. A point is a very positive result against a hardworking team like Exeter. We’ll take that point and move on to Tuesday.

“It was tough, but we knew it was going to be tough. They were by far the best team we’ve played at home this year.”

Jackson provided an attacking threat all afternoon, the frontman using his pace and ability to stretch the Exeter back-line.

He was rewarded with his 15th goal of the campaign in the 38th minute, receiving Mark Hughes’ long pass and dribbling to the edge of the area before firing into the top right corner for his first goal since mid-March.

“I’m obviously delighted to get on the scoresheet again,” said the 24-year-old. “I was happy just to get us level and cancel out their opening goal.

“I want to turn up for every game and work as hard as I can to try and help get the team positive results. Goals are good, but the main thing about my game is the work that I put in.”

The striker is eagerly looking forward to Tuesday evening’s home clash against Yeovil Town, and hopes to achieve the aims he set himself when he joined Stanley last summer.

“We’ve been so positive on this run that we’ve been on. We go into every game thinking that we are going to win.

“We’ll work hard over the next couple of days, get ourselves ready for the next game and then go again on Tuesday.”