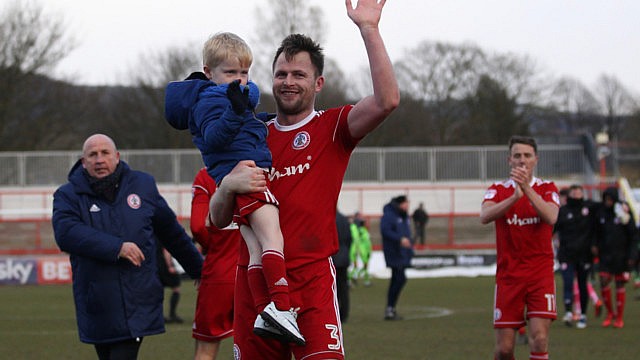 Mark Hughes admits he has been blown away by Stanley’s season so far – but is experienced enough to know that nothing is won yet.

If the Reds beat fourth placed Exeter on Saturday they are promoted to League One, the third tier of English football, for the first time in their history.

“If someone had said that after our Boxing Day loss to Carlisle, which made it five defeats on the bounce, you wouldn’t have believed it. We couldn’t see where the next win was coming from never mind going on the run we have. The game after at Grimsby, we went back to basics and we have never looked back since.

“It’s been a collective effort. We have kept three clean sheets in a row as a defence but everyone is working hard in front of us and we are just mopping up.

“I know the gaffer doesn’t make subs but there is quality on the bench and we know, if we don’t play well, they are pushing us. It’s everyone at the club – but we haven’t won anything yet.

“We know we need one win but I am experienced enough to know that football can bite you on your backside, we won’t be getting ahead of ourselves.”

Billy Kee’s scruffy goal won it at Colchester on Saturday – his 23rd goal of the campaign – but Hughes knows it doesn’t matter how they go in.

“We knew Colchester would be a tight game and the first goal was absolutely massive.

“It was like slow motion where I was watching it, I could see the spin on the ball and could have gone anywhere and it went into the net.

“People say it is a fluke but it’s not. Billy has to be in the right place at the right time and he has for most of the season. It’s obviously happy days – but we know we have achieved nothing yet.”