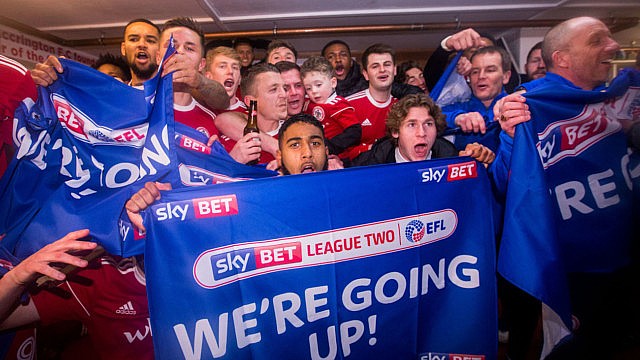 Jimmy Dunne admitted when he landed at Accrington Stanley his thoughts were a long way from promotion.

The Burnley loan defender first had to get into the Stanley side when he rocked up at the Wham Stadium in January – but once he got there he wasn’t giving it up.

Dunne hasn’t been on the losing side in a Reds shirt and was threatening to sleep in his kit after he helped Stanley seal promotion to League One last night. 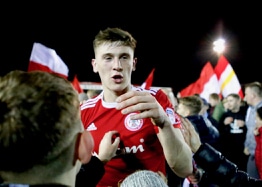 The 20-year-old has been an integral part of a fantastic 14 game unbeaten run – with 12 wins – which has seen Stanley clinch promotion with four games to go. And now they want the title.

Republic of Ireland Under 21 international Dunne admits it’s been a fairytale for him.

“They said go, learn your trade, develop your defending, develop your game. I never in my wildest dreams imagined the feeling I have got now with clinching promotion.

“And to do it with a couple of  games left and to go and try and win the league, that makes it even better.

“I am a young lad, some of the lads have experienced the other side of things where they have lost and didn’t get to celebrate so it is even sweeter for them.

“For me I just think it’s the greatest experience ever, I will never experience anything like this again.

“There are people who go their whole careers without winning anything or getting promoted so it’s an achievement I want to cherish. You might never get that feeling again so you enjoy it while it lasts.”

Dunne admits he feels at home at Stanley and the last three-four months have made him a better player and person.

“I feel like I have developed so much, become more of a man. There are loads of things I need to work on but I have got a feeling of what it’s like to be a real footballer and a man and the responsibilities which come with it.

“I feel like I have developed on and off the pitch in so many ways and that’s thanks to this club.

“When you find a club which you fit in with so well, you are winning games and all the lads are great and the staff are great, you love everybody, it’s an amazing feeling.

“To get this experience, I feel lucky!”