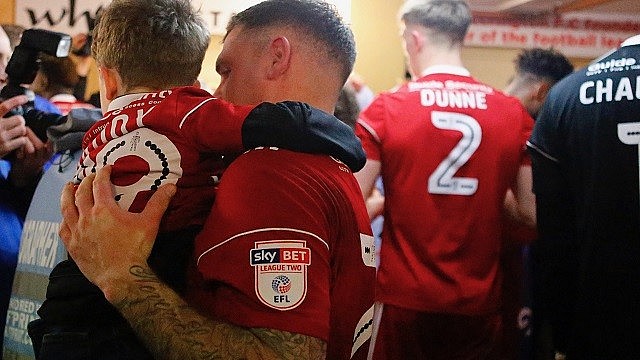 Billy Kee says Stanley clinching promotion is still sinking in – but their focus is now firmly on the League Two title.

The 25-goal striker says they have had a night and  a day of celebrations following Tuesday night’s 2-0 win over Yeovil but now it’s back to the hard work of trying to become League Two champions.

Stanley have a four point gap over second placed Luton with a game in hand. The Hatters can get to 92 points if they win their final three games – the Reds are on 87 with four games to go.

“We want to win the title,” said Kee, who has slotted home eight penalties. “We have had two days off, and a lot of fun, but now it’s time to sort our lives out, dig in and go for the league title.

“We want to win it. I think the hardest thing was promotion and we have achieved that now so we can relax a little in our final four games.

“But there is still a job to do and we all know that. We could actually do it on Saturday if we beat Wycombe and Luton lose so it is an absolutely massive game we are now preparing for.

“Wycombe will be tough – we know all about them, they have played the same for the last couple of seasons but we want to go there and come away with all three points.”

Kee admits it was ‘a horrible feeling’ two seasons ago when Stanley missed out on automatic promotion by one goal but says that hurt is now behind him.

“It was the fact we drew on the final day against Stevenage and then had to go into the play-offs when we were so deflated. We had a year to rebuild last season and I don’t think anyone expected the run we have been on this season – 14 unbeaten with 12 wins. It’s unheard of in this league really.

Kee, who won the SkyBet League Two Player of the Season, scored goals for Scunthorpe in League One and is enjoying his best ever goal return this season – and the striker believes he can step up again.

“I believe I can score in the Championship if I play there. If I get a chance, I will put it away. I like a tap-in and I can read the game so I know I will score goals in League One.”