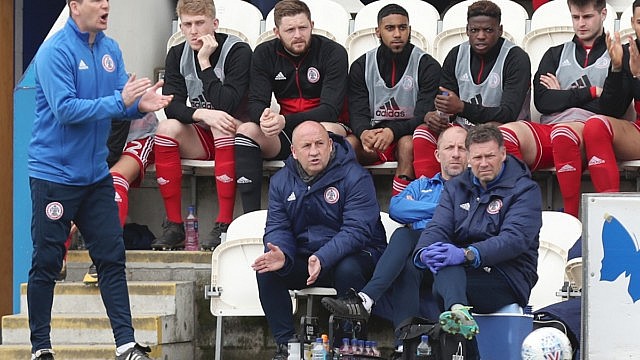 John Coleman is taking nothing for granted tomorrow as he knows Exeter City will be aiming to spoil the party.

Stanley can win promotion to League One for the first time in their history if they win against the fourth placed Grecians tomorrow.

It promises to be a tense but memorable day at the Wham Stadium if Stanley can clinch promotion – but Coleman knows Paul Tisdale’s side will be coming to win.

“It’s not a forgone conclusion,” said Coleman, whose side are going for a new club record of 10 wins on the trot at home. “It’s not just about turning up as Exeter will certainly have something to say about it.

“They are a good side, one of the form sides, and they have a lot to play for. They are a good football side which should lend to an entertaining game.

“There is a prize at the end of it but we have won nothing yet. People think we are over the line but no one in the club thinks that.

“This is a special game because we are playing a team who we can put out of the equation, but if we don’t do it this week it makes it harder for the next game.”

Coleman is hoping for a bumper crowd and a carnival atmosphere – with a happy ending after the devastation of two seasons ago when the Reds missed out on automatic promotion following a last day goalless draw with Stevenage.

“There is pressure on both teams tomorrow, both us and Exeter, and we expect a big crowd who believe they are coming to have a party, but we have been there before two years ago, although it’s not as sudden death as then with six games left.

“We are focused on the job and the players are keen to eradicate two years ago.

“I have always believed we can get promoted, I can’t stand it when people say don’t say the ‘p’ word as promotion has always been our objective and we have been speaking about it since day one.

“There has been a lot of attention on us but all publicity is good publicity as long as it’s positive and people love a David v Goliath story. The size and structure of us, we will always be seen as the minnows.

“I wouldn’t swap any of my players for any others in our league. It will be tense tomorrow, I never enjoy Saturday’s as I just want us to win so much, but hopefully I will be smiling by the end.”