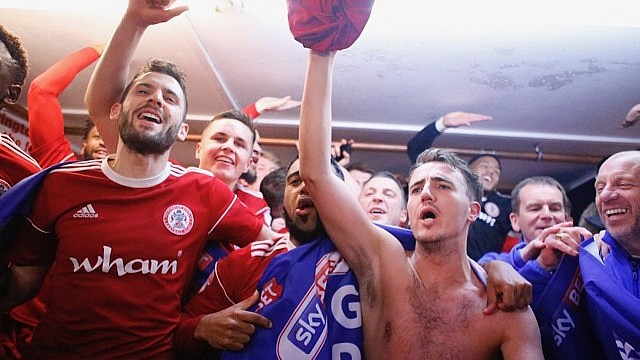 Best day of my life: Sean

Sean McConville hailed yesterday as ‘the best day of his life’ and admitted he was still pinching himself this morning after Stanley secured promotion to League One.

The winger is the only one left from 2011 when Stanley lost in the play-offs to Stevenage and then, following his return to the club, suffered the heartbreak of 2016 when the Reds missed out on automatic promotion by one goal in the final game of the season.

So to secure a historic League One berth with four games to go, is easily the best moment of McConville’s career so far.

“Two years ago it was one of the biggest disappointments of my career, it was the same for all the five players that were involved then and are still here,” said the 29-year-old, with Billy Kee, Mark Hughes, Scott Brown, Seamus Conneely the others.

“We’ve spoken about it before and I think that’s what’s made us strive to get us over the line this year.

“We’ve always let the younger players know that three points are massive every week and just kept them going.

“And it does make it sweeter. I think Andy Holt (chairman) commented that we weren’t ready to go up two years ago. Maybe he’s right, maybe it’s fate.”

Stanley have been on a fantastic 14-game unbeaten run – included a staggering 12 wins  – and they are unbeaten at home in 2018, only dropping points at the Wham Stadium for the first time against promotion rivals Exeter on Saturday.

“I think the older lads deserve credit because we made the younger lads believe it could happen. We’ve played in this league long enough to know if you get on a run of result you can quite easily get promoted, and that’s what we’ve found,” said McConville.

“It’s an unbelievable achievement, they are an amazing set of lads. We set our stall out at the start of the season to get promoted but no one believed us. We did though and look where we are!”

McConville and co celebrated with fans at the Wham Stadium long after the final whistle and the winger said it was special.

“To do it in front of these fans who have stuck with us was fantastic. I’ve been at the club through some dark times when we nearly folded after that tax bill (2009).

“It was tough. To come to the first of every month and wonder if you’re going to get paid or not is not nice.

“That seems like a long time ago, but that doesn’t happen now. I think we get paid two days early!

“Fortunately now we’ve got an owner who is not only a good man, he’s looking after the club with the club’s best interests at heart and I think we can go a long way with Andy Holt at the helm.

“We’ll enjoy this, hopefully go and win the league, enjoy a nice holiday in the summer but then come back and strive to attack League One with a bit of venom.”