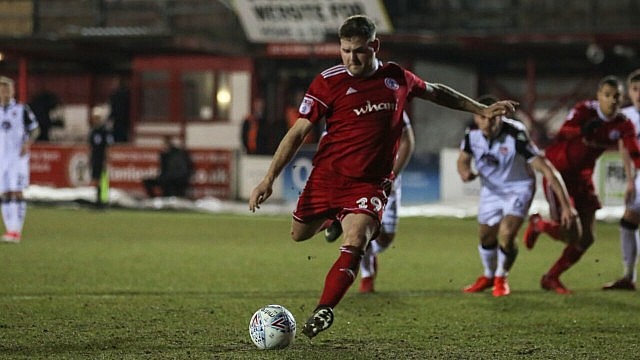 Accrington Stanley moved to within one point of league leaders Luton Town, after beating Lancashire rivals Morecambe 1-0 at the Wham Stadium.

Billy Kee’s 20th league goal of the season was the difference between the two sides, calmly slotting home from the penalty spot after Kayden Jackson was fouled by defender Dean Winnard in first half added time.

Stanley travel to Luton on Saturday, knowing that victory there would see the Reds leapfrog the Hatters to take top spot in League Two.

It was a deserved victory for John Coleman’s side, who showed their attacking intent right from the start, but were frustrated by goalkeeper Barry Roche in the opening period.

In the 15th minute, Scott Brown surged into the penalty area before his low shot was parried away by the diving Roche to keep the scores level.

Two minutes later, Jordan Clark played through Kayden Jackson, who went one-on-one with Roche, only to be denied the opening goal by the ‘keepers outstretched leg.

The visitors were kept relatively quiet in the first half by a well organised Stanley side, being reduced to shooting from distance and having to try and catch Stanley on the counter-attack.

Despite the Reds’ relentless pressure, it seemed that the game would remain goalless heading into the break, before referee Eddie Ilderton pointed to the spot in added time at the end of the first half.

Jackson received the ball and burst into the area, only to be pulled down by Winnard, and the referee had no hesitation in awarding Stanley a penalty.

Up stepped Kee, who sent Roche the wrong way and stroked the ball home to give Stanley the lead.

Morecambe looked more dangerous after the restart but failed to test Aaron Chapman in the opening exchanges of the second half.

Brown almost doubled Stanley’s lead just before the hour, Kee’s clever backheel finding the midfielder at the edge of the area, but his thunderous effort was deflected for a corner.

With 20 minutes to go, the visitors started to apply plenty of pressure of their own, but the Reds’ defence stood firm, resulting in a succession of corners as the Shrimps almost levelled the match.

Steven Old rose highest to direct a powerful header goalward, but it was cleared off the line before the rebound went over the bar.

Jackson and Kee could have both added to Stanley’s lead late in the second half, but some desperate defending meant that the game finished 1-0, giving John Coleman’s side all three-points and a seventh straight home win.