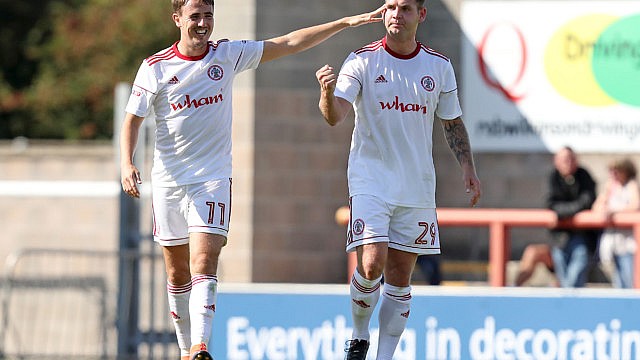 One of the best: Sean

Sean McConville has hailed Saturday’s stoppage time winner at Luton as one of his best ever moments with Accrington Stanley – but the winger knows that the job isn’t done yet.

Billy Kee’s 93rd minute winner ensured that Stanley leapfrogged Luton to take top spot for the first time ever in League Two, in the most dramatic of fashion at Kenilworth Road.

McConville had put the Reds in front just before half time, his 12th goal of the season in typically stunning style.

But while the 29-year-old insists they will savour the moment it will be business as usual come training this week, with 10 games still remaining.

“It’s up there as one of my best moments that I have experienced playing for this club,” he said. “I’ve had some great nights and some great goals but to see the smiles and the celebrations from all of those travelling fans – it was such a special moment.

“It carried on into the dressing room and we had a little bit of a dance and a sing and we enjoyed the moment.

“But at the same time we are well aware that we haven’t won or achieved anything yet, we will enjoy the victory but we will come straight back down to earth and we will be fully focused on going into the Forest Green game and picking up another three points.

“We have got 10 cup finals left and that is how we will treat each game, we will take each game as it comes and we will keep ticking off those wins.”

McConville added another to his array of superb goals since returning to Stanley back in 2015, but where does he rank his latest strike?

“I’d say that one is definitely in the top five,” he laughed. “I scored another great one against Luton in the FA Cup, so I do enjoy scoring good ones against them.

“I was disappointed to miss one five minutes earlier, but when Kayden [Jackson] laid it off to me in that position, I had no other thought in my head than to hit it. I’ve caught it sweet as a nut and it’s gone into the top corner.”