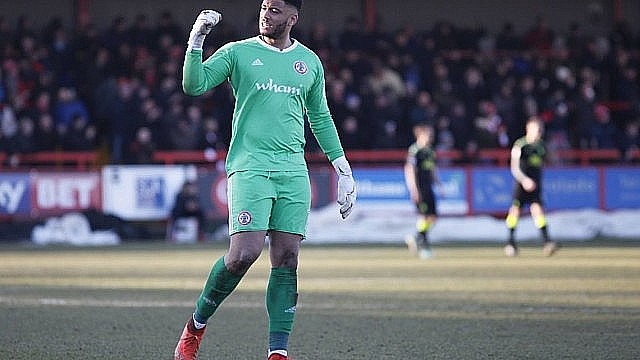 One game at a time: Chappy

Stanley goalkeeper Aaron Chapman insists that their only focus is on Morecambe this evening despite a weekend trip to league leaders Luton.

A win this evening could see the second place Reds close the gap to just one point ahead of the looming trip to Kenilworth Road.

But the in-form goalkeeper says it would be dangerous to focus on anything but opponents Morecambe – as Stanley look for a seventh straight home win.

“To be honest, nobody has really specifically mentioned the Luton game in the dressing room,” he said. “All the talk has been about 12 cup finals rather than focusing on an individual game or an opponent.

“We take every game as it comes and I think that it would be dangerous to start focusing or prioritising any one game over another. The focus has to be on Morecambe, then when Thursday comes around we will switch our thoughts to Luton, with hopefully another three points to our name.

“Morecambe is always a big game at this club anyway, it’s the big one for the fans and for the area.”

Following Saturday’s postponed trip to Newport, Chapman believes that the key for Stanley now is not to let the momentum that they have built in 2018, slip.

“It’s always horrible to have games called off, especially with us being at the business end of the season now,” said the 27-year-old.

“There aren’t many games to go and you just want to play as often as you can, when you’re in form you want to keep them coming and build as much momentum as possible.”

You can read the full feature interview with Chapman in tonight’s match day programme ‘Red All Over’ which will be available around the ground for £3.