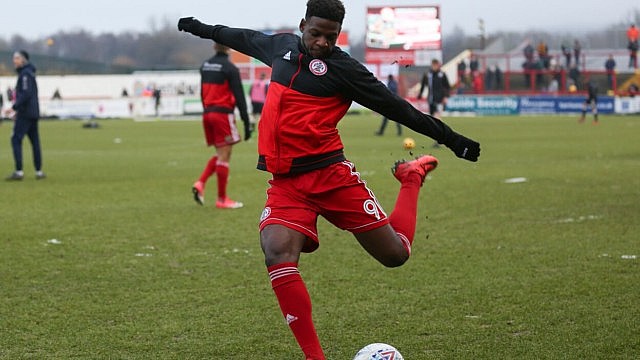 Last weekend our match day programme ‘Red All Over’ caught up with our Derby County loanee, Offrande Zanzala.

Q: Hello Offrande. Firstly, you’ve been here for just over a month. How do you feel your loan spell is going so far?
A: I’ve enjoyed it. I have been out on loan before, but this has been the best one so far. Even though I haven’t played much, I have come in and settled really quickly. The lads have taken me on board and there’s just a great spirit around the team. We’re doing great in the league, we’re going for promotion and atmosphere for a young player like me is just great to be around. I’m looking forward to seeing how these next few months unfold and what it brings.

Q: How have you found settling in at the club and moving not far from the area?
A: I’ve settled in really well and quickly, the players have welcomed me in which has helped me to focus on just playing football and for the prize which is promotion. Everyone at the club is heading towards that and you can only enjoy it and make the most of it.

Q: You say that this has been your best loan so far. Why is that?
A: Being around a team that is going for promotion has been a key part of that. The team is a great team and the manager himself is just a great person. He’s just a very down to Earth person and is someone I can really relate to. At this moment in time, everything is going for us and it’s looking really good for the club as we head into these last few months. We’re taking it game-by-game and that feeling of having something at stake, like promotion, isn’t something you can’t replicate at say Under-23s football back at Derby.

Q: You speak very highly about John Coleman. What sort of role does he have in mind for you, for the remainder of this season?
A: We have got two quality strikers here that are doing well. Billy Kee is the top scorer in League 2 at the moment and Kayden Jackson is also having a great season and is amongst the leading scorers. I can only learn from that. When they and the team are doing so well, I know it is difficult to be getting those starts. It’s all part of the experience. The manager has said I am doing well in training and that I just need to keep doing what I am doing, keep working hard and that he knows what I am capable of. He wouldn’t have brought me in otherwise. I know I will get my chances and it’s up to me to take it. Everyone wants the same thing here and if I can play a part, then I will be more than happy.

Q: How much are you learning from being around somebody like League Two’s top goal scorer in Billy Kee?
A: He’s a fantastic person and a great person around the changing room. Billy, as a lot of people know, has great character and also has a lot of experience in the game. He’s a role model and from the time that I have been here I have learned so much from him – not just on the pitch, but off it as well. He’s a leader, so supportive in every situation, but he also demands the best out of all of us. He demands 100 per cent and he’s the sort of character that every team that wants to be successful needs. His goals have been important, but technically and tactically he stands out at this level. He has helped me see the game in a very different aspect.

Q: We sit third in the league as it stands, how much are you enjoying the battle for promotion?
A: There are so many teams that are going for promotion and for a lot of clubs, the three points really matter. The gaffer says to us a lot, in the changing room and in training that we need to treat every single match like a war. It’s do-or-die, and you have to go out and put everything into it. A lot of games at this level are even and scrappy and you have to put everything in to come out on top in those games. We’re just keeping our heads down, we’re working hard and if we keep winning our games then we will be fine. The only people that can let Accrington down is ourselves and we’re focused on making sure that’s not the case.

Q: How important is it for you to be ready and to be able to make an impact when the time comes?
A: It is very important to be ready not just for me to show people what I am capable of doing, but also for the team, because they need to rely on people like me to come in, fit in straight away and help them to move forward. I am confident within myself to take that challenge and do the best I can for my team and myself. But, it’s an opportunity which has to be taken, as you can only have one chance to show what you have in the locker, it’s up to me to take it or not, but I am looking forward to when the chance does come.