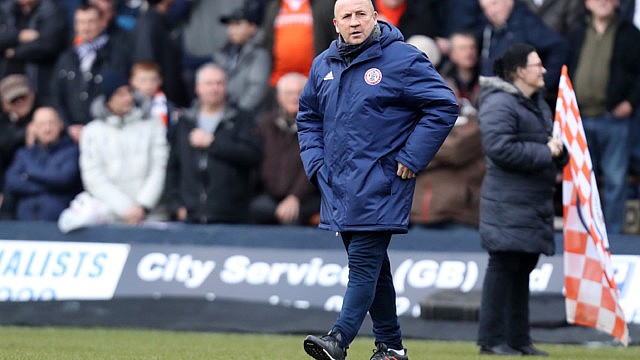 We are buzzing: Coley

John Coleman admits it was frustrating not having a game last weekend – but he says it hasn’t dented the ‘buzz’ around the club.

Stanley were knocked off top spot by Luton after the Hatters beat Barnet as Accrington’s game with Yeovil was postponed due to international call-ups.

Other results did go Stanley’s way but, after being in the Soccer Saturday studio, Coleman can’t wait to see his side back on the pitch again, starting tomorrow at Mansfield.

“The buzz is still good around the players,” said Coleman. “I think some of the results going in our favour helped.

“It’s never ideal having a weekend off and there will be a bit of rustiness but it’s up to the management to deal with that.

“One of the things you can taste around the place is how keen, hungry and excited the players are about the whole end of the season.

“You can feel how much they have got their bit between their teeth and everyone is really looking forward to the Easter games.”

Stanley have nine games to go with tomorrow’s opponents Mansfield in seventh place and third place Notts County coming to the Wham Stadium on Monday, with an eight point gap between the Reds and the Magpies.

“It would be lovely to win the league and we will strive to do that but first and foremost the prize is to get promoted. If we can surpass that and win the league, that’s smashing, but if someone offered me third place now I would bite their hand off.

“We are going to have blips in the last nine games but you cannot get too high or too low, all we can do is keep working hard.

“I think that’s what sets us apart from other teams in League Two, our work-rate.

“We have to play a lot of the teams around us but there are no easy games whether you are playing teams at the top or the bottom as Chesterfield showed by beating Notts County on Sunday.

“It’s about consistency, we have a way to approach the game, we play a certain way and we have found a way to pick up points, especially since Christmas.”