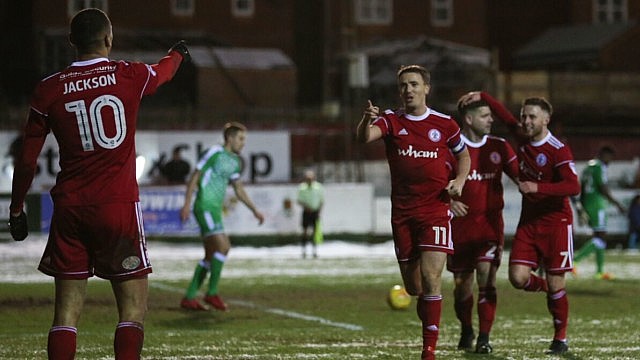 Accrington Stanley moved back into League Two’s automatic promotion places after beating Swindon 2-1 in another dramatic affair at the Wham Stadium.

Billy Kee set his side on their way with a first half penalty before Kayden Jackson made it two just past the hour mark.

A frantic finish was ensured when Marc Richards scored from the spot but Swindon’s task was made difficult when Kellan Gordon was shown a straight red card.

Despite a late rally, Stanley held on to claim a huge three points and move third in the table.

Swindon made a fast start on a cold night at the Wham Stadium, with each corner of the pitch still lightly covered in snow, making for an interesting battle when the ball went out wide.

Luke Norris was inches away from putting the visitors in front in just the sixth minute, a rasping half-volley just swerving wide of Aaron Chapman’s post.

All of the play was inside the Stanley half and just a minute later and Swindon went close again as Ollie Banks’ shot whistled just over the bar from distance.

The Reds grew into the game as the half progressed, Jackson and Jordan Clark combining down the right to cause the away side problems.

It was that combination that played Sean McConville into the box, the in-form winger was brought down by Matt Taylor and Kee made no mistake from the spot, scoring his 19th of the season and putting his side in front in the 25th minute.

That lead was almost doubled on the stroke of half time as Scott Brown advanced to the edge of the area and struck a low shot well but was thwarted by the diving Reice Charles-Cook, meaning it remained 1-0 at the interval.

Stanley came under pressure in the opening stages of the second half but just past the hour mark doubled their advantage with a stinging counter-attack.

McConville released the electric Jackson down the middle and the forward, who had caused problems all night, made no mistake – slotting a low shot beyond Charles-Cook to make it 2-0.

But, the Reds were pegged back almost immediately, Janoi Donacien was adjudged to make a foul inside the area and Swindon were handed a way back into the game.

Richards despatched the penalty but seconds after halving the deficit Town were reduced to 10-men when a melee broke out and substitute Kellan Gordon was given his marching orders after a coming together with McConville, ending their hopes of finding a leveller as Stanley saw out the remaining minutes.