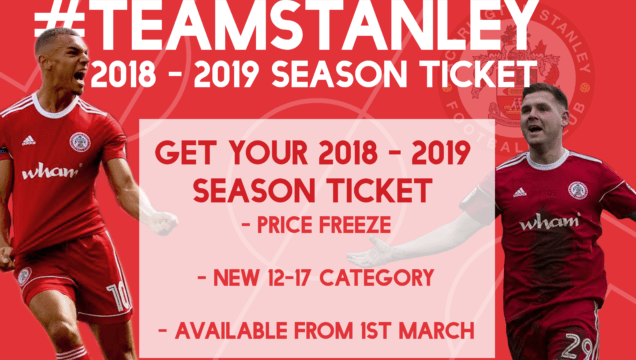 Accrington Stanley aims to be full of teen spirit as the club released their season ticket prices for the 2018/19 season.

Prices for adults, concessions and Under 12s have been frozen as Stanley make a charge towards League One.

And, in the new 12-17-year-old category, specifically aimed at Stanley’s ‘Fans of the Future’, an Early Bird Season Ticket is just £79 – a saving of £50 for the same age group from last season.

“There has been a lot of emphasis on Stanley as a community club and we want to make the prices especially accessible to the younger generation,” said Managing Director David Burgess.

“The new category is 12-17 and, with an Early Bird Season Ticket, it works out at just £3.43 a game and hopefully we will be watching Stanley in League One. It’s a superb deal.

“We have frozen our Adult Season Tickets in the William Dyer and Jack Barrett Stands which means an adult can again watch Stanley from just £9.52 per game over the 23 home league games.

“Concessions and Under 12 Season Ticket prices have also been frozen and Loyalty Cards remain at £20. We believe we are offering one of the best deals to watch football in a unique atmosphere at the Wham Stadium, with fans close to the action on the pitch and able to meet the home players in the Sports Bar after the game.

“It’s exciting times for Stanley as we also hope we will be making strong progress with our 1,100 seater-stand which will be a family orientated, again as we embrace the community of Accrington – and hope they embrace us as we look to climb the leagues.”

Question and Answers on Season Tickets: