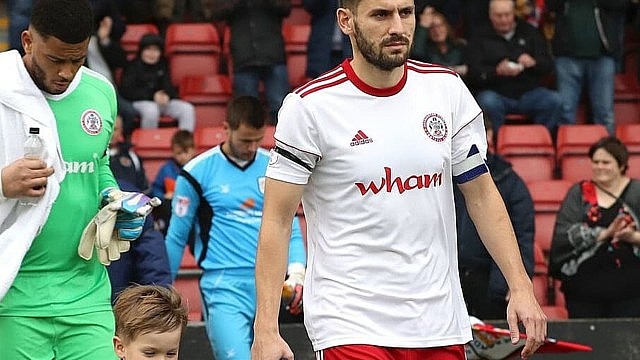 Skipper Seamus Conneely believes that today’s point at Barnet could be a valuable one come the end of the season.

Billy Kee’s second half penalty ensured that Stanley left the Hive Stadium with a 1-1 draw, following a difficult test from a side fighting for their lives.

The Reds dropped to third in Sky Bet League Two, but Conneely is remaining positive as the unbeaten run stretched to five matches.

“It was a difficult game and I think it was a point gained in the end,” he said. “They started off on the front foot and made it hard for us, but that was what we expected to happen, so we’re a bit disappointed with ourselves – we didn’t match them for that first half hour.

“We had a good spell towards the end of the first half when we finally got a grip of the game, then I thought that we started the second half very well. The first 25 minutes was all played inside their half and I thought the equaliser was fully deserved.

“Then it could have went either way and I was happy with the point in the end, as they finished the game strongly and Akinde got in behind us a couple of times. Hopefully at the end of the season we look back and think that was a good point.”

Stanley’s captain hailed the spirit of his teammates to fightback and also credited referee Brett Huxtable for making the right call to award the penalty, following a push on defender Jimmy Dunne.

“I think before Christmas we’d have lost that game,” said Conneely. “I think if we’d have fallen behind away from home, then the game would have drifted from us and we’d have lost it – it happened a couple of times.

“But, we stayed positive, we created plenty of chances and forced our way back into the game, I thought the penalty was a brave decision from the referee but the right decision – there was a definite push but a lot wouldn’t have given that to the away team.”

With no midweek fixture before hosting Cambridge next week, Conneely is looking forward to a full week of preparation.

“We’ve played a lot of games since Christmas and there’s a lot of tired legs out there,” he added. “We will use this week well, we’ll get a good week of training in and be ready for the Cambridge game next Saturday.”