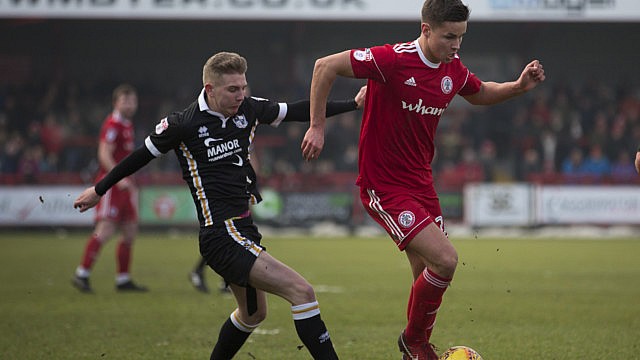 Callum Johnson is happy to help Stanley wherever he can.

The 21-year-old has earned plaudits for his versatility in recent weeks, after initially impressing in the centre of midfield, Johnson’s started the last two matches on the left wing.

During last night’s tight 1-0 win over Crewe, a second half tactical switch saw him move to right back for the final half hour.

And the former-Middlesbrough player is delighted with his role as Stanley’s utility man.

“I’ve played just about every position on the pitch since I arrived,” he said. “I had a bit of a laugh with the gaffer about it the other day!

“With Sean’s [McConville] injury, I’ve been asked to fill in on the left wing. It’s a new challenge for me and something that I’ve enjoyed doing.

“At the end of the day, if I’m playing football, then I’m happy. I just do everything that I can for the team and try to learn every position as well as possible.

“We have lots of experienced players who can help you through it, I’ve been playing in front of Janoi [Donacien] and have Yozza [Mark Hughes] just behind me. They’re constantly talking me through the game and passing on their experience.”

Stanley’s performance last night didn’t hit the heights of recent weeks, but Johnson was pleased with his teammates ability to roll up their sleeves and get the job done.

“One of the main things that I’ve learnt since joining the first team environment, is that winning is everything,” he explained. “It wasn’t the best performance or the greatest game, but we’re all pleased because three points is the most important thing.

“We’re already looking towards the next one, we’d like to play a bit better but if it’s another scrappy game then we just need to focus on doing the job and getting another win.”