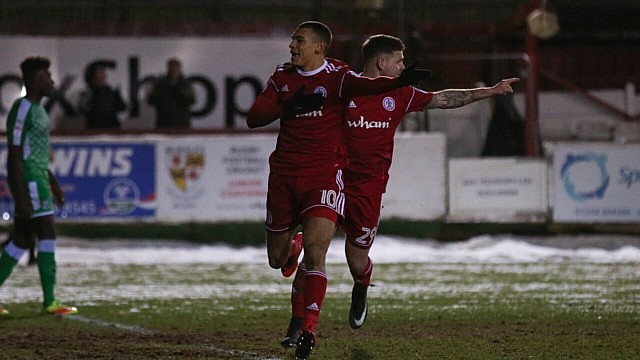 Jackson on target for promotion

Kayden Jackson says there is more to come from him as he aims to shoot Stanley into League One.

The striker has scored 11 goals this season and Stanley had a couple of enquiries about Jackson in the January transfer window.

He admits he has come a long way since he signed from Barnsley in the summer as he looks ahead to Coventry tomorrow, with Stanley in third spot.

“I have loved every minute of being here,” said Jackson, 23. “I have learnt a lot here and have progressed a lot since the start of the season.

“I’m buzzing and I can’t believe I am sat here with double figures in goals and with Accrington in the automatic promotion places, when in the summer I was scraping around for a club and didn’t know where I would be. It’s mad to think how far I have come.

“But we believe this is just the start and we now want to stay in the automatic spots.”

Jackson admits it has been a season to remember for him so far as he is level with Sean McConville on 11 goals, chasing Billy Kee’s 19 goals.

“It has all worked out perfectly for me. I moved to a house 20 minutes from here last year without knowing I would be here, the club has been a perfect fit for me and the management and the team play the style of football that suits me.

“We have shown the different ways of scoring – Billy scores with anything he touches at the moment, Seani is flying and I am sure I will overtake him soon in terms of goals!

“We are all confident though and we have a lot of firepower.

“It’s brilliant to do the job I dreamt of doing as a kid.”

Jackson says working with Kee has been a huge help.

“I have learnt a lot since I have been here. Billy is one of the most experienced strikers in the league and I learn little things every day from him.

“We do compliment each other, I do the running and he looks after the ball. It’s not all about the goals, although it’s nice to score, but I have chipped in with a number of assists, won penalties and I work hard every game.

“I have made quick progress, developed my game since the beginning of the season but there is a lot more to come from me.”

And he hopes he can show this tomorrow as Jackson admits that Coventry holds a special place for him.

“They were said to be interested in me in the summer and it gives me that extra motivation to do well against them.”