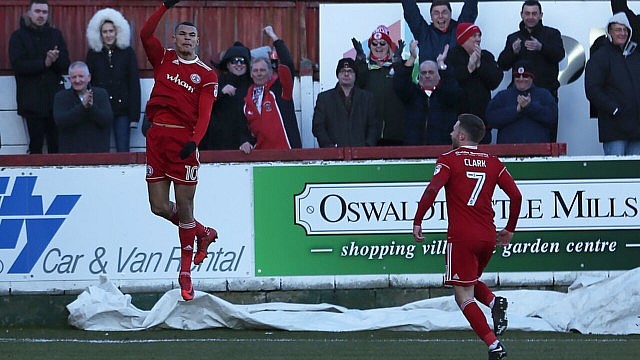 Striker Kayden Jackson has his sights set on Luton after Stanley closed the gap to three points on the league leaders.

Jackson scored his 13th goal of the campaign against Cambridge on Saturday to make it six home wins on the trot for the Reds.

And the striker aims to add to his tally as Stanley hope to charge for the top.

“I am delighted with 13 and, as a striker, you set yourself targets,” said Jackson, who turned 24 last Thursday.

“I am well on my way to being where any striker wants to be at the end of the season. I keep my targets to myself but I will keep plugging away and hopefully we will keep getting the wins, that’s the main thing.”

Cambridge felt they should have had a foul as Jackson leapt with George Taft before he scored but Jackson said it was fair.

“A few times I have got in a good position and I have been bundled over and not been given anything.

Stanley’s last three games haven’t been the prettiest – but they have secured seven points out of nine which has moved them into second spot.

Jackson continued: “Before those three games we were chatting among ourselves and Seamus Conneely said said it going to be a team that wins the ugly games that gets promoted or will be there or thereabouts.

“Thankfully we have done that in the last three games. The pitches are difficult, sometimes it’s icy and cold, sometimes its soft, and it takes a while to get used to them.

“We can’t play the football we were at the start of the season, the nicer football, on these types of pitches but we will keep working hard and you could see on Saturday that everyone put a shift in for the team and most importantly we are getting the results.

“We have said from day one at the club that we wanted to win the league but we won’t get carried away, the gaffer will keep our feet on the ground.

“There is a long way to go, there are 12 games left, and we have got to play everyone around us which personally I am looking forward to.

“All we can do is keep putting in 100 per cent and if we do this we will get where we want to be at the end of the season.”