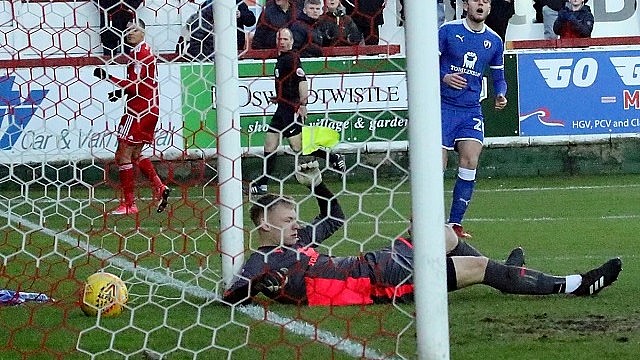 It was my goal: Jackson

Striker Kayden Jackson hopes Stanley are back after their 4-0 win over Chesterfield.

The former Barnsley man scored the third goal for the Reds – although it was given to Chesterfield keeper Aaron Ramsdale after his shot squirmed in at the near post.

Mark Hughes, Sean McConville and Billy Kee were also on the scoresheet as Stanley celebrated two successive wins and moved up to fourth place in the league.

“It was a good performance, it was a similar feeling to the start of the season where we were winning games and enjoying good wins like that as well,” said Jackson.

“I was pleased to score so I was a bit surprised when my dad told me at the end that it was given as an own goal.

“I am going to get that changed, the referee has said it was my goal, it was clearly going in so hopefully it will be changed.”

If the goal is given to the Stanley frontman, it takes Jackson’s tally for the season to nine goals – and he is happy with his return.

“If someone had said eight or nine goals before the new year, I probably would have taken that as my game is not just about scoring goals.

“It’s also about helping the team, chipping in with assists and working hard so I do a lot more for the team than soley concentrating on goals.

“Goals make you feel good but as long as the team win, I am happy to score or provide an assist.

“We did go on a bad run in December but hopefully we have put that behind us – we had a few losses in a row so hopefully now we can get a few wins on the bounce.

“Hopefully this shows Accrington are back. When we had bad spell a lot of teams might have thought Accrington had blown up but hopefully we are back on track.”