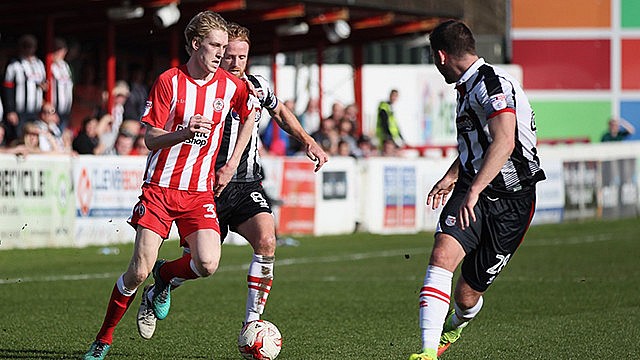 Accrington Stanley have signed defender Harvey Rodgers for an undisclosed fee in the final hours of the the January transfer window.

Rodgers, 21, was on loan from Hull with the Reds last season and John Coleman was keen to sign him at the end of the campaign.

The York-born centre half chose to go into League One with Fleetwood instead but didn’t make a league appearance for the Cod Army.

“I am buzzing to be back,” said Rodgers. “I loved every minute of my time at Accrington, it was my first club away from Hull so it was special.

“Thankfully Accrington are in a higher position than they were last season when I joined them. I think they were in the bottom three or four.

“Now they are pushing for promotion and I want to play my part in helping them get into League One. I can’t wait to get started again.

“It didn’t work out at Fleetwood, I didn’t get off to the best starts with being sent off on my debut, but you learn from it.”

“We are delighted to sign Harvey,” said Coleman. “We wanted to sign him at the end of last season but he opted to go to Fleetwood.

“He is someone we have kept tabs on since then as we know what a strong defender he is and thankfully the two clubs have been able to do a deal.

“We felt we had room for one more signing in our squad and this is a very strong addition.”

Rodgers has signed a two-and-a-half year deal which will keep him at the Wham Stadium until 2020.