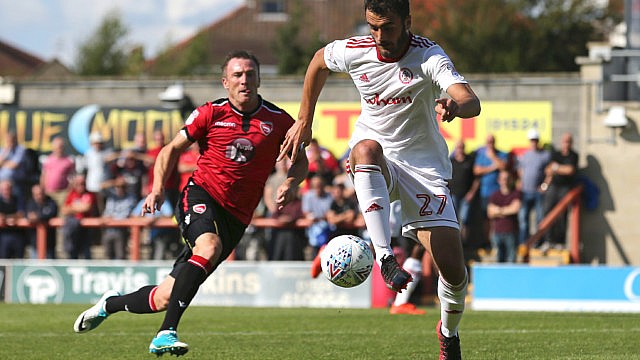 Time to move on: Faz

With the game at 0-0, the 21-year-old saw red at the end of the first-half, the Imps scored from the resulting penalty, before Stanley went on to lose 2-0.

But the decision was overturned by an FA Regulatory Commission and he is available for selection on Saturday, as Crawley visit the Wham Stadium.

Now Rawson is fully focused on helping his side end their recent poor run of form and move back up from fifth spot.

“I’m really relieved to be available for Saturday,” he said.

“I’m happy and looking forward to the game. Lincoln is behind us now, we all know what happened and everything that came with it.

“But that’s been put to bed and now I can focus on Crawley, prepare for that and hopefully come away with a win.

“Referees do have it tough and can make mistakes. Fair play to the FA for recognising that and for making the correct call.”

Stanley are without a win in three, but the on-loan Derby man insists that this squad has too much quality to be down for long.

“There are going to be dips, high points and low moments throughout the course of a season,” said Rawson.

“That’s football, I’m 100% sure that we will shine through this little dip that we’ve been on and despite that dip we are still right up there and among the pack, so that’s great. We will hit form again and make our position even stronger.

“I think that we have a lot more to give, we could run away with it if we want, that’s the quality we have here.”