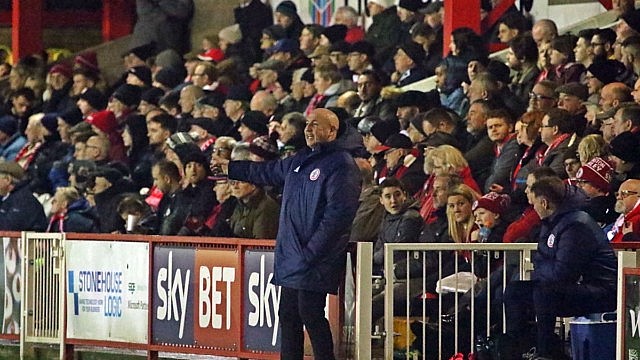 John Coleman has told his players that now is not the time to feel sorry for themselves as they prepare to head into the New Year period.

The Reds face Grimsby away and Morecambe at home in the space of 48 hours as they look to end their recent poor run of form that has seen them lose their last four games in the league.

Coleman says the job of his backroom staff is to try and pick up his players ahead of a crucial run of fixtures and sees similarities to a situation Stanley found themselves in last season.

“There is a bit of anxiousness among the players,” he said. “It’s our job to relax them and pick them up in training this week.

“Sometimes when you go into a bad run of defeats you can start feeling sorry for yourselves, we’ve got to be positive, we’ve got to be lively in training, be vibrant in what we do and how we get our messages across to them.

“There’s no point sending a team out to compete if they aren’t full of confidence, that’s what we’ll be working on in the next couple of days.

“Last season we had been on a horrendous run and Billy Kee popped up with a scrappy goal against Crewe, we managed to keep a clean sheet and our season turned around from that point.”

Stanley were backed by over 240 away supporters at Carlisle on Boxing Day and Coleman knows that his side owe them a performance at Blundell Park.

“We owe the travelling fans a performance that’s for sure,” said Coleman. “We haven’t been good on the road lately.

“We’re playing in patches at the moment, we’re very fragile, one mistake seems to make us buckle.

“In the end we got ourselves back into the game at Carlisle and ended up controlling it for periods, but the flaws in our defending come back to haunt us.

“We have to make sure we put that right, concentrate more and get back to putting in solid performances.”