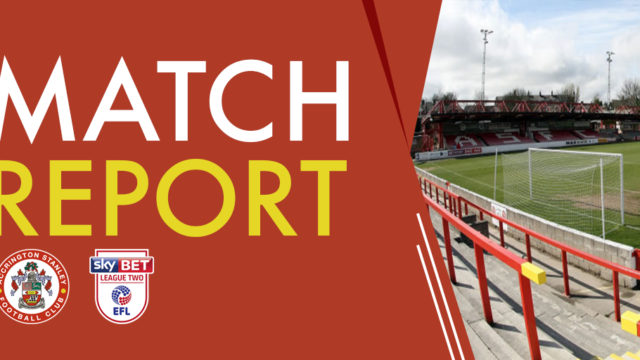 Second-half goals from Billy Kee, Sean McConville and Kayden Jackson saw Stanley end 2017 with a 3-0 win on the road at Grimsby Town.

A close first-half saw very little in the way of goalmouth action, but a resurgent Accrington side took the game by the scruff of the neck scoring two goals in six minutes on the stroke of the hour-mark.

Jackson sealed the win in the 77th minute with a goal against his former club as Stanley secured a first win in five at Blundell Park.

The first-half at was an extremely tight and nervous affair, both sides struggled to impose themselves as several niggling fouls and injuries prevented any momentum building.

The first clear-cut chance fell to Stanley, Jackson raced down the right hand side before delivering a low ball into the box which eventually found its way through a sea of bodies and into the path of McConville who could only bundle it wide.

McConville then forced the first save from either goalkeeper in the 42nd minute, when his free-kick sprung Ben Killip, who was making his Football League debut, into tipping it around the post.

There was three minutes of added time at the end of the first period, those three minutes led to the best two opportunities of the match.

They both fell to Stanley, first Kee blazed a glorious chance over the bar from inside the six-yard box, the forward had time and space, before Ben Richards-Everton aimed a powerful header inches wide of the post to complete the action for the first 45.

It was the lively Jackson who forced the first save of the second period, he was slipped in by Jordan Clark before thrashing a shot at Killip from a tight angle which the keeper beat away for a corner.

Stanley’s bright start to the second-half was rewarded in the 55th minute, a superb run and cross down the left by Janoi Donacien found McConville in the area, he took a touch before having his legs taken from under him and referee Darren Drysdale pointed to the spot.

For the third game running Kee made no mistake from the spot, sending Killip the wrong way to score his 14th of the season.

It took just six minutes for a rampant Stanley to double the advantage as Kee turned provider for McConville who powered a header over the line via the crossbar, sparking wild celebrations both in the technical area and in front of the travelling away supporters.

Jackson sealed the three points 13 minutes from time with his first goal for 11 matches, he picked up the ball in space, used his pace as he had all afternoon and fired a blistering shot into the roof of the net.

There was a nice moment in added time as Stanley Academy captain Josh Hmami made his Football League debut replacing Kee.