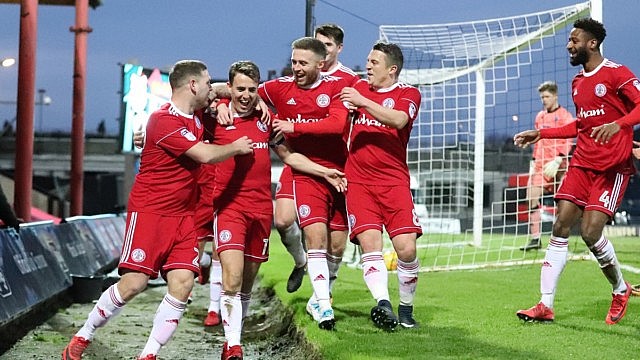 It has been quite the couple of days for Stanley stand-in skipper, and today’s second goalscorer, Sean McConville.

After attending the birth of his third child yesterday, a baby boy, McConville led the lads out at Grimsby, in the absence of club captain Seamus Conneely.

He then scored the decisive second goal that set the Reds towards a romping 3-0 victory and a first win in five.

The 28-year-old also won the penalty from which Billy Kee had opened the scoring and spoke following the game about the whirlwind chain of events.

“It’s been an emotional 24 hours,” said McConville. “My third baby was born yesterday, a little lad and we managed to top it off today with a great win.

“It’s been unbelievable really, a feeling that I will probably never go through again.

“The baby was born about 10 to five yesterday and I left the hospital about 10 o’clock last night, so it’s all been really good timing.

“I got some sleep and prepared for the game as normal and I knew today that something might just drop for me.

“I thought I should have scored in the first-half but then in the second-half I’ve won the penalty and then managed to get my head on one to score the second.”

Asked if he had choreographed a special baby celebration, McConville said: “I did! But I didn’t do it through to the end because I was just ecstatic with scoring a header!

“I don’t think that I’ve scored any in my career before this season and now two of my last three have been with my head.

“People have questioned us during this run that we’ve been on and we’ve probably questioned ourselves.

“But today we’ve shown that we do have the character, to come to Grimsby win 3-0 and be comfortable just shows the characters and the ability in this squad.

“Now we have to focus on getting it like that week in, week out again.”